We made the long drive out to the Point Reyes Lighthouse.  The drive was beautiful.  We saw pretty dairy farms, hundreds of deer and some elk.  It was a clear day and we could see for miles down the South Beach.  We were enjoying the view of the lighthouse when the ranger said the elephant seals were just arriving.

We hopped in the car and drove a few minutes to the Elephant Seal Overlook.  We saw one in the water and it looked like a dark manatee.  Its black flippers broke the water as it moved slowly, eating.We walked further down and path and then heard them.  They make a sound like when you hit your palm on the top of any empty bottle.  There were five or six together in the water and they seemed to be quarreling.  There were also ten or fifteen lounging along the beach.  One was snug against a rock.  Another was resting parallel at the surf line and eventually slip into the water.The path doesn't go close to the beach to avoid disturbing the seals.  Drake Beach, which is close to the same parking lot, was closed, because the seals will soon be pupping.

This is a spectacular park!  There is a staffed ranger station with exhibits about the local whales, ocean currents and more.  We also saw a salamander and a huge slug. 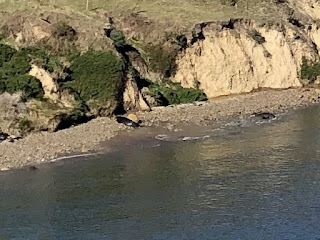 The two shiny black animals are the seals 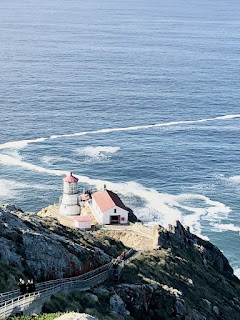 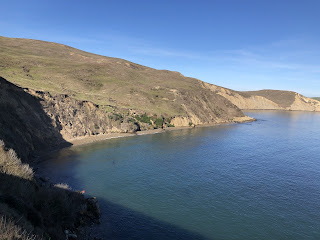 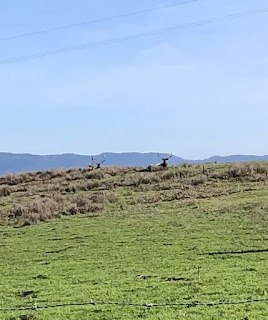 Elk on the ridge