“Come Fall in Love”, a musical at the Old Globe Theater, San Diego

This fast-paced musical takes the audience from Boston, across Europe and to Northern India.  The script is hilarious and the cast is outstanding with great vocals and dance routines with off-the-chart energy.  The hero, Rog, is a sweet-natured Harvard slacker played with great charm and comedic timing by Austin Colby.  He is also a fabulous dancer.  The other half of the romantic duo is Simran, played wonderfully by Shoba Nayaran.  She is an academically driven philosophy major eager to tour Europe to see where Voltaire walked and Einstein did his work.  The problem for this very cute couple is that she is destined for an arranged marriage in India in just a month.

“Come Fall in Love” is based on one of India’s most popular films - “Dilwale Dulhania Le Jayenge”.  There are some hints of music from this original film, but otherwise, the songs are new.  I love the film soundtrack and wouldn’t have minded more music from the movie.  There are some funny references to the film.  Rog’s GPS takes him to meet Simran in a field that looks like the one from the film that is the setting for one of its most famous songs.

You don’t need to know a thing about India or Indian movies to enjoy the show.  It has all the rom-com tropes.  The couple start out, of course, not liking each other.  There is a nice song: “I like you, but not that way” that eventually returns with the realization that they do like each other “that way”.  The meet-cute ends with her in jail and the audience left to wonder about the fate of a small flock of flamingoes.  The couple is forced to share a hotel room after first stopping at every hotel in Bern.  This very funny scene has one person playing every hotel front desk manager in the city with a series of rapid costume changes.  Rog must next win over Simran’s stern father.  In a hysterical scene, Rog finds his would-be father-in-law feeding pigeons.  Would he not feed a pigeon if he knew the pigeon flew from America?, Rog asks.  The scene concludes with Rog trilling like a bird to make it clear that he is the American pigeon who wants to be accepted.    Yes, it all works out!

The play does explore various views of arranged marriage.  In another hysterical scene Simran wrestles an enormous stuffed bear to show Rog how she will teach her intended spouse to be a perfect husband for her.  Shoba Nayaran really shines in this funny musical number.

The rest of the cast is also excellent.  Kinshuk Sen, as the intended groom Kuljit, has a great voice, mad dancing skills and outstanding comedic presence.  Kate Loprest and Jeremy Kushnier play Rog’s parents and add to the comedy with some very funny scenes.  Simran’s parents add some seriousness to the work. Balder and Lajjo, well played by Irvine Iqbal and Rupal Pajara, represent traditional Indian values that view marriage as a joining of families as well as individuals.  In one serious moment, Lajjo sings wanting the world for her daughter, but being forced to acknowledge that the world often limits happiness.

The ensemble cast works hard in this show.  Every dance number is high energy and there is a lot of physical comedy, including a canoe and a giant swan floatie. 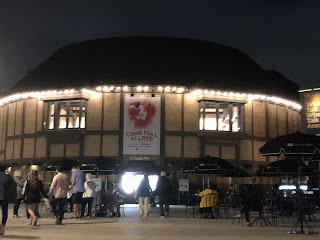