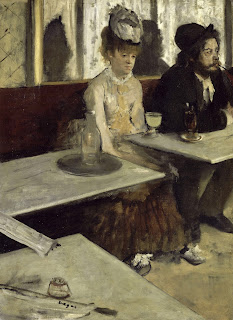 Absinthe caused a moral panic in Europe and the United States.  This strong spirit was made from wormwood, feared as a mind-altering drug.  It was a favorite of the decadent artists of the Impressionist era and appears in works by Degas (above), Manet and others.  It was banned for decades beginning in the early 1900’s.  Today, absinthe is made without wormwood and is legal.

Wormwood, the restaurant, pays tribute to some of the culture of of absinthe and fin-de-siecle  France with an absinthe-inspired menu.  Absinthe has a very strong flavor of anise and is not my favorite.  At Wormwood, it is smartly used as flavor notes in cocktails and some dishes.  They do offer straight absinthe served traditionally with ice water dripped through a sugar cube.

I started with a spritz Provence made with Prosecco, Gentian Amaro and a hint of absinthe.  It was a nice light, refreshing start to a great meal.  We ordered the beet salad and sourdough bread to start.  The beet salad was excellent.  The beets were complimented by some creamy avocado and there were thin slices of kumquats for a sour/sweet citrusy note.  For our main course,  my friend had halibut topped with a salsa of capers and grapes with a bed of celeriac purée.  The salsa topping was an unexpected flavor punch and the ample celeriac made the halibut into a filling and satisfying dish.  It was a great plate!  I had smoke duck confit.  The duck meat was combined with a gnocchi in a rich, creamy sauce.  This was a very successful dish that was warm, tasty and comforting.  It was a cool evening and it was perfect.  For dessert, we had a very nice cake with ice cream.

The menu is really interesting with fresh takes on some classics of French cuisine.  The cocktail menu also looks amazing.  I’m looking forward to a return visit.  I was very impressed.  It is a small restaurant and it was noisy.  It also had a neighborhood feel.  People were talking across tables and we struck up a conversation with the people next to us who were from Florida and had come to San Diego to visit family.  This type of conversation rarely happens in restaurants!

I had a good view of the bar and I was very impressed with the bartenders.  There were two.  Both seemed very skillful.  They peeled orange rind for drinks fresh; shook drinks over ice and then strained the drink and poured over fresh ice; they poured liquor down a swizzle stick; they used a short straw to taste the drink before serving.  They used many classic techniques that most bartenders don’t bother with.  They obviously knew what they were doing and cared enough to do everything correctly.  It was a pleasure and also very entertaining to watch them at work. 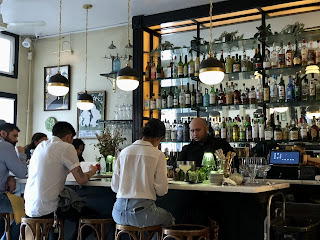 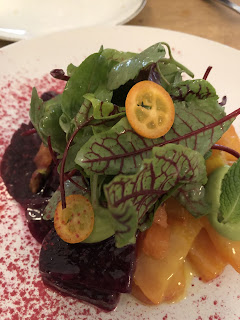 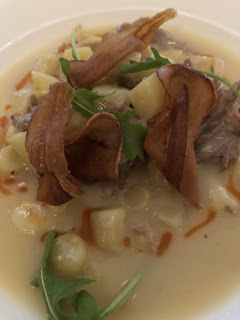 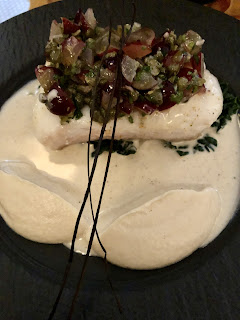 Halibut on celeriac topped with capers/grapes 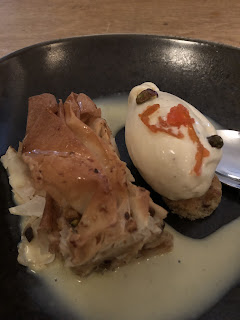