Sunnylands was the home of the Annenbergs, who made their fortune in publishing.  They used their wealth to create a retreat.  The Center became almost the West Coast version of Camp David, hosting Presidents, cabinet members and foreign dignitaries.  The Annenbergs were close friends of the Reagans, who visited frequently when Ronald Reagan was President.  The retreat had visits from both George H.W. Bush, Bill Clinton, George W. Bush, Barack Obama, Queen Elizabeth, Prince Charles, Xi Jinping and many others.

The Annenberg Center is open to the public at no charge.  It is a mid-century modern building with pretty gardens, featuring native plants.  There is a short film about the Annenbergs and many photographs of their distinguished guests.  There is also an art gallery.  For our visit, the exhibit was the work of Yaacov Agam.  Agam's work is op art with many pieces that have a kinetic element.  The art work changes as the viewer moves.

The Annenberg mansion is near the Center and has its own golf course.  The historic home can only be seen by tour.  The tickets for the tours are released on the 15th of the month for the following month.  From the Center, you can't even get a glimpse of the house.

We spent about an hour, wandering the grounds of the Center, enjoying the gallery and watching the film.  I want to return for a tour of the mansion.  The tours don't run during the summer. 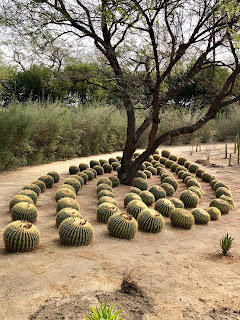 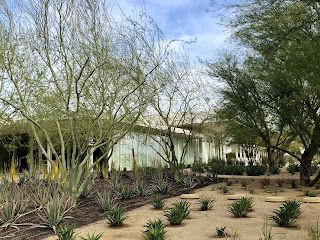 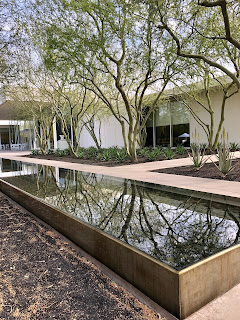