Map of the Grand Canyons of La Jolla mural 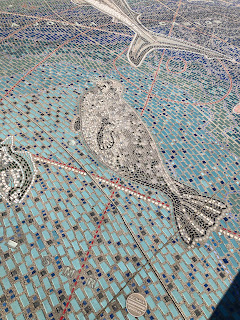 The Map of the Grand Canyons of La Jolla is an outstanding piece of public art.  This large mosaic depicts at range of sea life just off-shore.  The mosaic shows a gray whale, great white shark, sunfish, a sea lion, birdlife and much more.  It is very beautiful and a fantastic place to play "I Spy" with kids.  It relates to photographs and descriptions of the animals on signs along the mural.  Each creature has a number and the number links to a display.  The descriptions also contain QR codes with even more information.

A very nice man explained how the mural is also a map.  One edge is the land, including landmarks, such as the Scripps pier.  The color of the tiles change to represent the depth of the sea floor.  The sea canyon is clear from the deep blue color of the tiles.  The sea creature appear at the depth they are most commonly found.  The birds also appear close to the shore area for shore birds and at the outer edge for deep sea birds, such as terns.

It really is a wonderful piece - both as an engaging work of art, guide to marine life and a map of the sea floor.

It is located in Kellogg Park, adjacent to the children's playground.  It is well worth spending some time there. 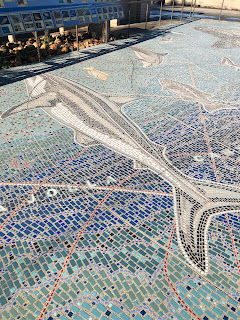 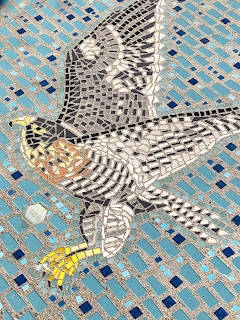 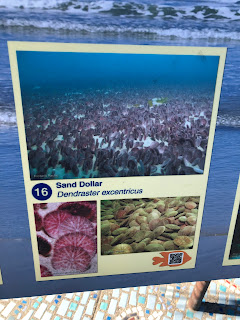 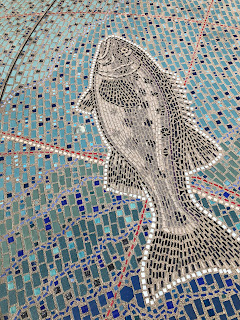 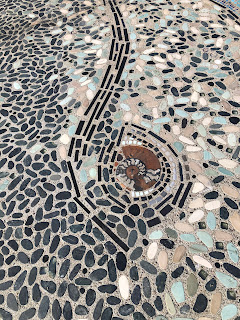 Detail of the eye of the gray whale