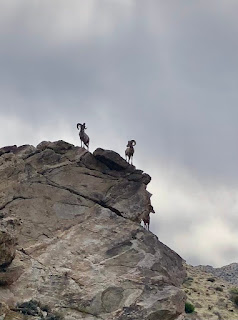 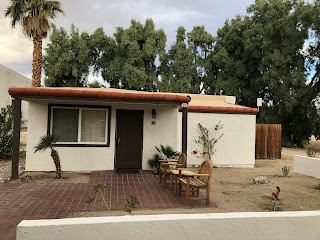 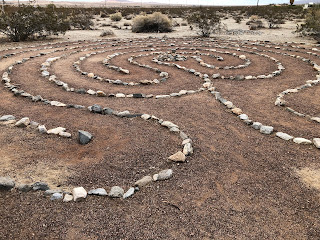 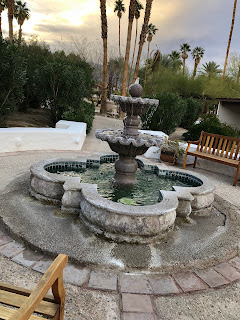 We make a trip to  Borrego Springs at least once a year.  There is great hiking in the Anza Borrego State Park.  This time, however, we had signed up for a night sky viewing experience.  The area is famous for its star gazing, because it is a small community that tries to minimize light pollution.  We drove through Santa Ysabel, past Ranchita and then along the winding road (S22) through the mountains and into the Park.  We saw bighorn sheep!  Six rams!  Three were making their way over a rocky outcropping and three were in a small gully adjacent busily eating the green winter grass.  Each ram paused to itch its behind against a rock and then scrambled down the rocks.  It was an amazing sight!

The State Park is huge with many areas to explore.  We tried to drive to a new area.  It is an overlook called Fonts Point.  We were in a car and we started down the dirt road to make the 4-mile journey.  We should have known better, because every other vehicle had 4WD.  The road quickly turned from hardpan to sand.  We turned around.  It just seemed risky.

We had a late lunch at Carmelita's, which cheered us up.  It is an excellent Mexican restaurant downtown.  Our night sky experience was cancelled, because of heavy cloud cover.

We arrived at La Casa Del Zorro for the night.  It is a very nice resort.  Most of the rooms are in the form of separate casitas.  Ours had two bedrooms, two bathrooms, a large living room and a private outdoor hot spa.  It was very nice!  The resort has lots of fun things to do.  There is a large fitness center with pickleball courts, a yoga studio, tennis courts, pools, bocce courts, giant chess and more.  There is a rose garden, a stone labyrinth and wonderful views of the mountains.  There are charming fountains across the property.  We had a fun evening.  Breakfast was excellent.  I had a stand-out eggs benedict.  La Casa del Zorro is probably the nicest hotel in Borrego Springs.  Looking forward to our next visit!