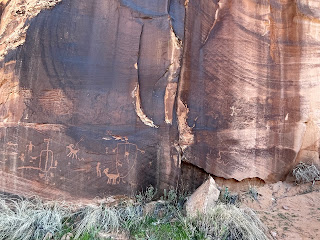 I booked this tour through Viator.  We met our guide at the Moab Reservation Center, just south of downtown Moab.  Our guide was Aaron and the tour vehicle was a UTV, which seated the three of us very comfortably. 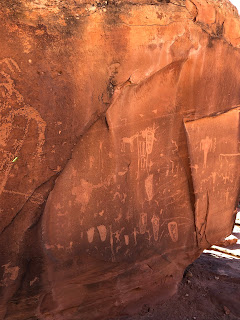 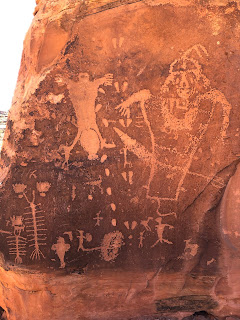 We stopped at several petroglyph sites.  It was helpful to have a guide, because it was easy to overlook some of them.  Many looked to have been "written over" over time.  In most cases, the images were very clear and easy to understand.  The people who made them are now called the Fremont.  They don't seem to be the ancestors of the Navajo and other modern indigenous people, because they were aware of them and don't consider them the work of their ancestors.  The petroglyphs are thought to be over 1,000 years old and some possibly much older.

To me, these are probably notes about the resources and geography of the area.  Some of the squiggly lines seem like maps noting, for example, whether a canyon is a box canyon with no exit.  The people probably lived in the area seasonally and the notes were helpful memory joggers about deer, water sources and special resources.  Some reminded me of Maya glyphs of harvest baskets.  The Maya had a written language using syllabary glyphs; It is unknown if these Fremont petroglyphs represent a written language.

We did plenty of back roading, so it was also an adventure.  We zipped along past mountain bikers, ATV enthusiasts, dirt bike riders and some cows, who seemed "over it" with all the human activity.

The canyons are beautiful.  The tour is also helpful in pointing out hiking areas to visit.  The tour also includes panoramic vistas and a view of Dead Horse Point State Park.

I thought the tour was a bit pricey at $350 per person, but it was a private guided tour, so there may be less expensive options from the same company.