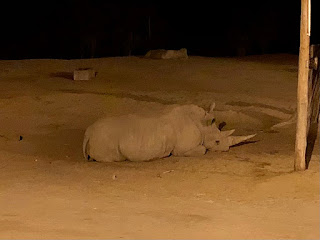 The Roar-n-Snore is a sleepover at the Safari Park!  Attendees can park in the upper-most reserved lot and the check-in is right there.  The bags are collected and taken by van to the campsite, so you don't have to lug them down on your own.  After the very efficient 4:15 PM check-in, we gathered under the nearby trees and met an animal ambassador - a South American armadillo.  It was very cute and had a blast looking for grubs under the mulch.  This is a different species from the type found in the United States (nine-banded). 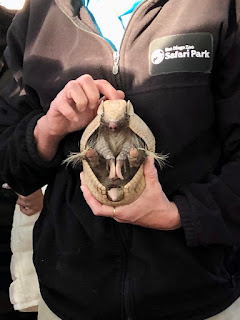 Then, we had a guided tram ride through the Park.  This is the highlight of the Safari Park and a unique experience.  We had a few minutes to find our tents and get set-up.  Dinner was served next to the campsite.  It was a buffet of BBQ chicken, pulled pork sandwiches, salad, hot dogs, potato salad and mac-n-cheese.  As dusk settled in, we took a guided small group tour of the lions, the Kilima Overlook and the elephants, followed by s'mores by a campfire.
For me, the best part was observing the animals settling in for the night.  The rhinos snuggled together like big babies.  There was a few-months-old baby rhino and a slightly older baby.  Each slept just next to their mother.  Very cute.  I also enjoyed the night noises.  The lions roared several times in the night and the elephants trumpeted.  The rhinos definitely snored.  The surprising thing was how silently the elephants could be as they moved around their enclosure.  They were just visible in the low light, but were so quiet as to be almost unnoticeable. 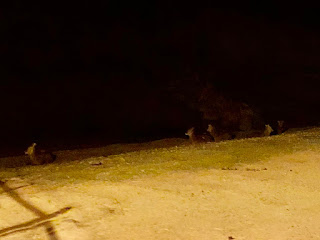 The waterbuck slept just at the edge of the lights

In the morning, I went down at 6:15 AM to see the lions again.  The Safari Park is trying to give the animals more control of if and when they go out on public exhibit.  The male lion bounded out from the night enclosure with a huge roar and busied himself inspecting his area.  There was coffee and I  grabbed a cup and saw the elephants start their day.  There are always very knowledgeable guides around to answer questions.  They know a lot about the history and stories of the individual animals.  Breakfast was a buffet with eggs, French toast and bacon.

Then, we saw the cheetah run.  The cheetah chases a lure and can reach a speed of over 60 mph.  The cheetah was having so much fun, she was allowed to run three times.

Our final activity was a bird encounter with a crowned crane and an eagle owl.  The birds were brought right up to us.  Very impressive!  Our bags were waiting for us at the exit.

I had the most basic package.  The tent came with eight sleeping pads, a lantern and a trash bucket.  It has a solid tarp floor.  I brought a sleeping bag and pillow and was warm and comfortable.  My suggestion is to also bring a camping chair.  I found it awkward to put on my shoes without a chair.  A good flashlight is a must! 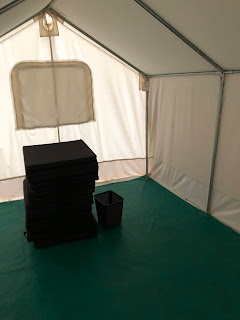 The pads folded up neatly and the tent could sleep four easily. 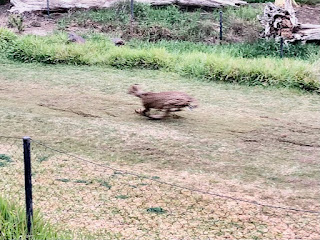 This blur is a cheetah at full run 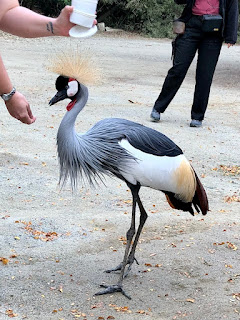 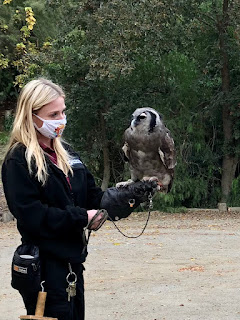 The Eagle Owl gets its name from its size.  It is all owl!