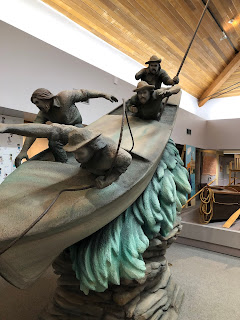 Green River, Utah is a nice stopover on the way between Salt Lake City and Moab.  The Goblin Valley State Park, about 45-minutes by car from the center of town, is a must-see!

The downtown of Green River has the John Wesley Powell Museum.  You will appreciate the museum more if you know something about Powell before your visit.  I read "Beyond the Hundredth Meridian" by Wallace Stegner.  Powell lead the first scientific exploration of the Green and Colorado river.  He was also the second director of the U.S. Geological Survey and lead the Bureau of Ethnology at the Smithsonian.  The museum focuses on his expeditions.  He explored the Colorado River and Grand Canyon, mostly by boat, despite having an arm amputated during the Civil War.  The museum also celebrates the achievements of other river runners of the area.  There is a nice shop with books about the region and gifts.

We had dinner at the Tamarisk restaurant, which has a nice view of the Green River.

The town is about an hour from Moab.  It has a surprising number of hotels.  We stayed at a very new and clean Holiday Inn Express.

The area is famous for watermelons.  A watermelon parade float is kept in the parking lot of the museum.  There is also a Tesla supercharging station and lots of gas stations and coffee shops. 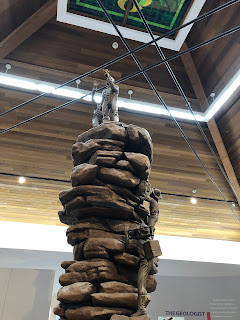 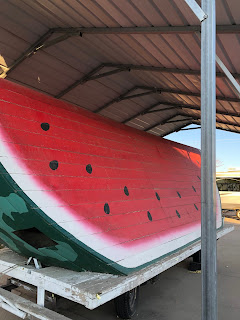 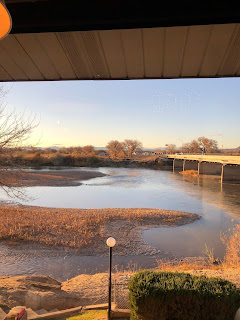 The view of the Green River from Tamarisk