Every foodie needs to try this place!  Tzuco is an outstanding, upscale Mexican restaurant featuring cuisine of the state of Guerrero.  "Tzuco" is named for the town of Huitzuco.The food was amazing and the menu is interesting.  There are some hyper-regional dishes and also better known food, such as cochinita pibil.  There are also some classic French dishes, such as French Onion soup.

Our appetizer was "tlacoyo" - a blue corn masa base with black bean puree, green beans, salsa, sour cream and queso fresco.  This was loaded with flavor.  For main courses, two of us had the pibil and one had the lamb baracoa.  The pibil was served with blue corn tortillas.  The baracoa came with interesting pickled vegetables.  We had great CBD-infused mocktails.

The portions were huge, so we had enough for each of us to have a lunch of leftovers.

The dessert was beautiful.  It was a faux peach filled with a frozen peach mousse.  It was similar to a baked Alaska.  It easily fed all three of us.

The interior is worth a visit on its own.  It is an fascinating display of large slabs of fossils and cases with things like dried cactus paddles, herbs, minerals and many other things to study.  The staff is knowledgeable about the food.  I chatted with the waiter about epazote, an herb used in Mexican cooking and "nanches", a tiny fruit, as well as Guerrero and the cooking of the region.  It is so nice to have someone who really knows about the cuisine.

One of the best restaurants I have visited! 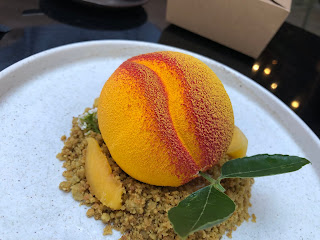 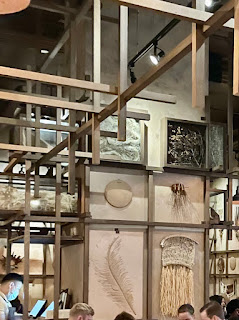 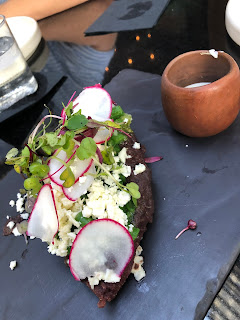 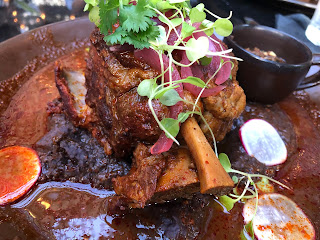 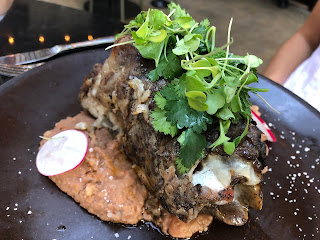