I get many of my restaurant suggestions from The Reader.  They recently recommended El Tejate, which has locations in Escondido and Carlsbad.  We went to the one in Escondido, which is a small strip mall.  This is Oaxacan food and this regional cuisine offered many dishes that were unfamiliar.  They have botanas de chapulines (fried grasshoppers) and botanas de gusanos (agave worms).  I've had chapulines and I'm not a fan.  (It's a texture thing).  If it were more than two of us, I would have given the gusanos at try.  For my exotic taste, I tried the signature drink, tejate.  This is made of fermented cacao beans, mamey pits and cacao flowers and thickened with toasted corn.  It is very good with a sweet slightly fermented taste that is hard to describe.  It is served in a small bowl. 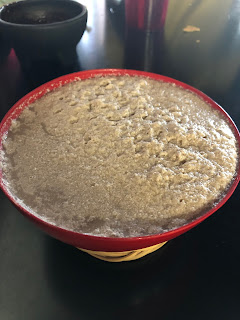 For our main courses, we had pork tamales, chicken tamales and a vegetarian burrito.  It is simple, but very tasty food.  The tamales were wrapped in banana leaves, rather than corn husks.

I definitely want to return.  There are so many things I want to try:  tlayudas, mole de ollas amarillos, salsa de chicharron and more.  Oaxaca is famous for its moles (thick sauces with dozens of ingredients and simmered for all of eternity.  El Tejate also had several varieties of mole.