We were really fortunate to talk to a ranger, who told us that the Mariposa Grove had re-opened.  It had been closed because of extensive damage after a Mono wind in January.  Mono winds are peculiar to the area and are named because the blow from the direction of Mono Lake.  They are sustained winds over many days with gusts over 100 mph.  The winds knocked down hundreds of redwoods, including a dozen giant sequoias.  The ranger put an optimistic spin on the calamity, noting that thousands of seeds were likely dispersed in this natural event.

We walked up the service road, up a steady rise for three miles to see the Grizzly Giant.  Along the way, we saw an interesting plant.  The snow plant is a ruby red fungus flower.  A fungus flower is one of a family of Mycotrophic plants that have no chlorophyll.  I haven't been able to find why the plant is red.  They grow under conifers, so perhaps it is related to the cinnamon color of the redwoods. 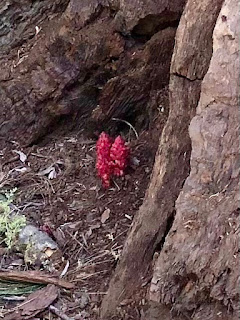 It was a pleasant walk through the groves.  There is also a trail through the woods.  It was shocking to see so many fallen trees, but it really highlighted the size of some of these trees.  The Grizzly Giant was spared, probably because it doesn't have too many branches anymore.  The tree is approximately 3,000 years old. 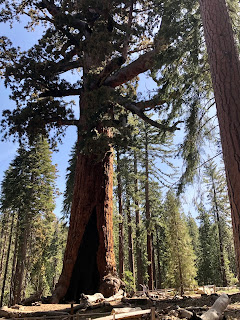 Then we drove into Oakhurst for lunch.  After fine lunch at South Gate Brewing, we went to the Sugar Pine railroad.  This was a fun one-hour train ride through the woods.  The front cars of the trains are split logs with seats in between.  There was very interesting with a narration about the history of logging in the area, narrow gauge railroads and the Shay steam engine.  It was a great experience! 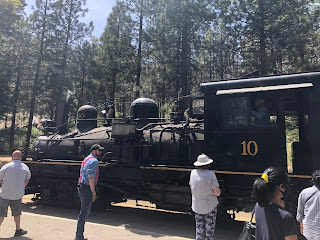 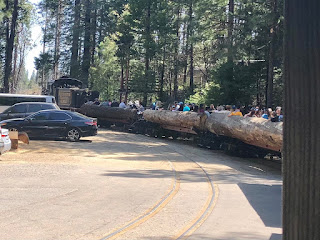