We visited a few years ago and took a group tour.  We so enjoyed our visit to Lions, Tigers & Bears that we returned for a "Behind the Scenes" tour. 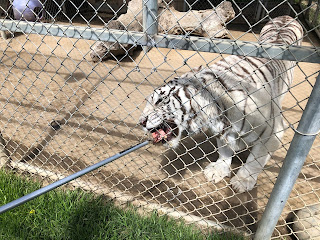 This experience lets you meet all the animals and feed most of them.  The facility is an accredited animal sanctuary and most of the animals are rescued from roadside menageries, exotic animal breeding sites and animal trafficking seizures.  Most of them have very sad histories of abuse and neglect prior to rescue.  Some of the bears had been declawed, which means that the first joint of each digit had been removed.  Terrible to see! Several states still allow wild animals to be kept with no regard for the animal's welfare.  Lions, Tigers & Bears give medical care, good nutrition, roomy habitats and forever homes to lions, tigers, bears, bobcats, a leopard and a cougar.

Feeding the animals was really fun!  We used long forks to skewer meat treats and pass them to the animals.  The bears got watermelon and sweet potato.  We learned about how each animal came to the sanctuary and about the plight of trafficked animals.  Many of the animals are old, but look in peak health with glossy fur and round bellies.  It was a special experience being so close.  The best part was listening to the sounds the animals made.  Most of them made little huffs of excitement.  When we finished feeding a lioness, she got very angry and snarled!  It was a bit intense!

The enclosures for the animals were very park-like.  Each had a water feature and lot of climbing structures.  Some of the animals weren't interested in being fed, but we still see them.  The black bears were all napping in their bedrooms and couldn't be roused.

This experience was $500 for two people and is a private tour.  The group tours are $45 for adults and less for children.  It is also a great experience.  There is also an AirBNB on-site that looked great.  The Rescue is on Martin Way, which is a small dirt road that goes past a small cattle ranch.  It seems like you've made a mistake, but immediately after turning onto the dirt road, you seem the sign for Lions, Tigers & Bears. 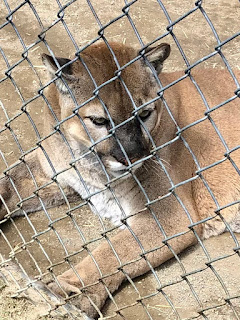 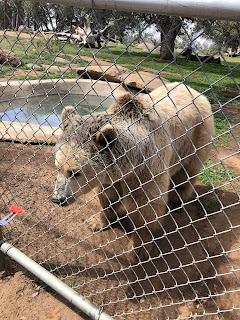 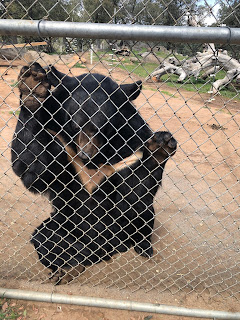 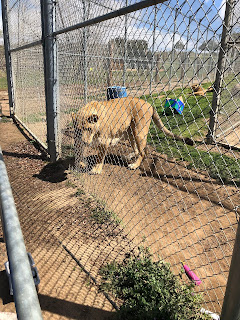