Last week, we had a great tour of Palm Springs mid-century modern homes and commercial buildings with PS Architecture Tours.  The tour was run a bit differently, with two cars, because of COVID.  We met our guide, Trevor, at the Palm Springs Visitors Center - itself an impressive building designed by Albert Frey.  Originally, it was a gas station!  After a brief introduction to the history of the town, we followed Trevor's car through the neighborhoods while he narrated by phone.  We made frequent stops at the many, many remarkable homes and chatted outside.

It has been difficult for me to appreciate this period of architecture because it was in vogue when I was a child.  I saw it as the stuff of California tract homes and it seemed dated to me.  The tour really changed my view.  The majority of homes in Palm Springs of the period were designed by top architects.  It became much easier to see how truly ground breaking the style is.  The emphasis is on geometry and also on the use of the materials themselves as decoration.  The style is eco-friendly and practical.  Many feature very deep eaves, which are practical in shielding the interior from intense direct sunlight.  The scale of the homes is more modest and then blend in the environment, rather than standing as a contrast.  The views of the mountains around the town are stunning.  Most the homes are situated so that the view is a focal point of the interior.

We drove through several neighborhoods of gem after gem.  We stopped in front of several of the most notable buildings designed by Albert Frey, Richard Neutra, E. Stewart Williams and others.  These homes are privately owned, so it wasn't possible to tour the interiors (especially not with COVID), but Trevor had many photographs.

Trevor was an enthusiastic and knowledgeable guide!  We couldn't have had a better tour.  Although the focus is on architecture, the tour is also worthwhile for anyone with an interest in Old Hollywood.  Most of the Rat Pack had homes here, as well as the Presley's, Marilyn Monroe and many others.  Palm Springs used to be a Hollywood hot spot and there are still celebrities with homes in the area.  We passed Leonardo DiCaprio's home, which was originally owned by singer and TV host, Dinah Shore.

It was a great 2-1/2 hours and Trevor gave us many suggestions for hikes in the area, as well. 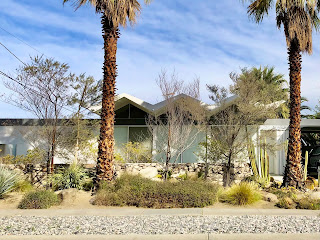 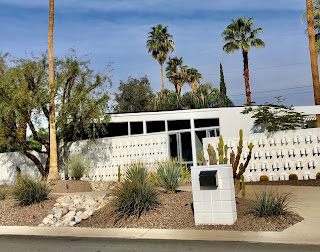 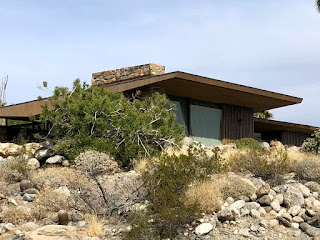 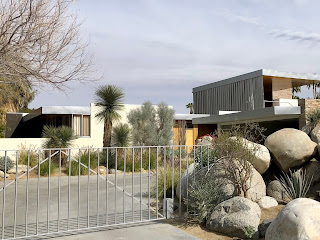 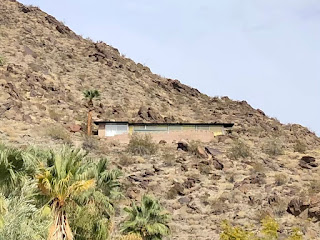