There are so many raptors around my home.  I've always been interested in their behavior - from stooping to snap up a lizard to their screeching courtship.  I was very excited about Total Raptor Experience.  They have locations in Ramona and La Jolla.

It was very easy to find their location at the Torrey Pines Glider Port and there was plenty of parking.  When we arrived, the pen held a steel-grey augur buzzard, a Harris's hawk and several African falcons.  We started with an introduction to the Harris's hawk.  They are native to the nearby Sonoran desert.  I learned that a person who hunts with a hawk in called an austringer.  We put on gloves and the hawk flew from person to person to receive a small meat treat.  The bird was surprisingly light!

People have used raptors as hunters for centuries.  Now, it is mainly a hobby.  The falconer or austringer has become the bird's personal attendant.  Just like I am staff for my cat.  The humans help the bird find food, protect it after it hunts and then keeps it safe from predators at night.  All the birds used in the program are bred from captive birds.

The next part of the program was working with the falcon.  There was much bird drama!  The falcon was released to patrol its territory (about a 1/2 mile along the cliffs) for local peregrine falcons and ravens.  The falcon was quite insistent that its air space be secured.  It found a local falcon to chase away and also some ravens to menace.  Fortunately, it doesn't perceive the paragliders as a problem.  Then, it was ready for flying to our gloves.  It was awe-inspiring to see this tiny, but mighty falcon close up.  We had a chance for it to fly to us from a distance, so it picked up some speed.

The most exciting part was the lure training.  The falcon swooped between us, silently, to pounce on a lure.  At the end of the program, the falcon received a quail wing as a snack.

I enjoyed this so much.  I loved seeing the birds up close and learning about their habits and the culture of falconry.  It was $77 per person and we were there about two hours.  The Glider Port is a spectacular setting for the program.  It was a delight watching the bird soar just along the edge of the cliffs!  This is a program for anyone who enjoys birds.  Despite their fearsome beaks, the birds weren't the least bit scary. 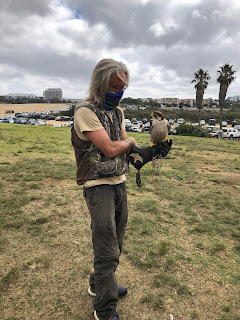 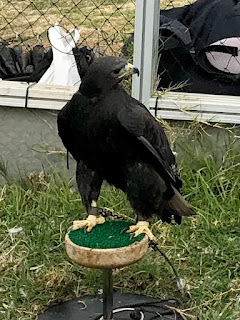 We didn't work with the Augur buzzard,
but what an amazing bird! 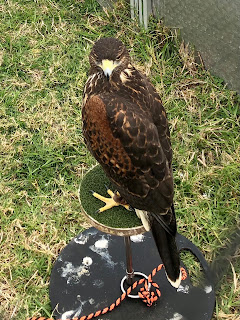 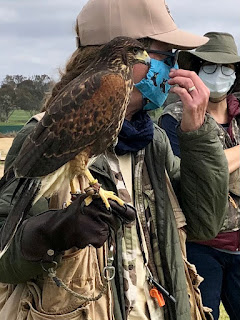 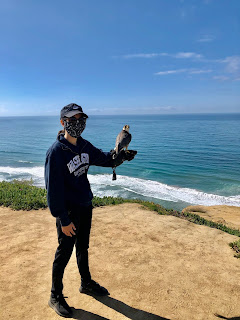 Falconry in the most beautiful place in the world