This is a major departure from what I usually write about, but it is important information that I think many will find helpful.  We have been waging a four-month battle against roof rats and deer mice inside our home.  Roof rats are large nocturnal rodents that nest in trees and love fruit.  Rats are notorious for damaging electrical wiring by chewing off the insulation.  Both rodents can carry diseases.  Here are some products and services that worked well, had mixed results or didn't help at all.

A trail camera - Rats are a much bigger problem than mice.  They are larger, noisier and more destructive.  Mouse traps often don't work against rats and rat traps usually don't work against mice.  It is important to know your pest.  Rat poop is black and the size of plump grains of rice.  Mouse poop is black and the size of salt crystals.  When we noticed rat poop, we set up a trail camera to verify and also observe where they were accessing the roof.  From the roof, they used an uncovered vent for a bathroom exhaust fan to enter a space between floors.  We bought a Browning Strike Force trail camera.  The most basic model is $124 and it is easy to set up.  We also had to buy a SD card reader for about $20. 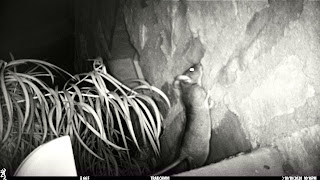 Get down from there you little creep!
Victor Power Kill Rat Trap/Victor Mouse Trap - This brand was the best of the snap traps.  It appeared to snap the necks of three roof rats and many mice.  It appears to be an instant death.  IOn one occasion, a rat only had its front legs trapped.  We had to kill it with a stick, because it was badly injured.  It was very upsetting!!!
Pro:  Easy to bait and set.  Cheap.  Generally offers a painless death.
Con: This can not be set anywhere a child or pet may trigger it.  I tested it with a pen and the pen shattered.  It must be put in a box with a hole for entry.  Also, unless you are willing to handle a dead rodent, it is one trap per kill, so you may need a lot. 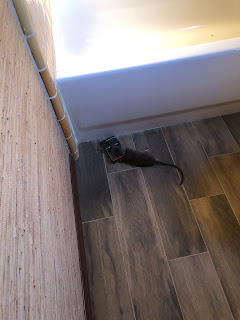 You picked the wrong house, buster!
The Shawn Woods YouTube Channel (https://www.youtube.com/user/historichunter) - has a wealth of videos about rodent control.  He is a very engaging host and his product reviews are very helpful.
Glue Traps - I only used ones for mice.  These are the easiest to set.  It is best to use some Duck Tape to attach them to a piece of cardboard.  Sometimes, the mouse can just get a bit of fur attached to the trap and run off with it.
Pro: Can be attached up walls or almost anywhere.  It won't harm children or large pets.  Cheap!
Con:  This can be a cruel death.  It doesn't kill the mouse outright.  I check these traps daily and put the trapped animal in a plastic bag in the hope that it suffocates quickly.  This was my trap of last resort after trap and releasing many mice.  It just got to be overwhelming.
Uhlik Repeater Live Traps for rats - This large live trap can jail many rats in one night.  It is an investment at $240.  The rodent problem is community-wide so I have loaned this trap to my neighbors.
Pro: It was easy to set up.  Built for a lifetime of use.  Rats were unharmed and easily transported with a transfer cage included.  It is recommended that live rodents be taken at least two miles away for release.  We live near a lot of open space parks, so it was easy to re-home the rodents away from any buildings.
Con: Expensive.  It is a large, heavy trap and it only suitable for outdoors.  It would be a challenge to place it in an attic.  The bait draws mice, which don't get trapped. 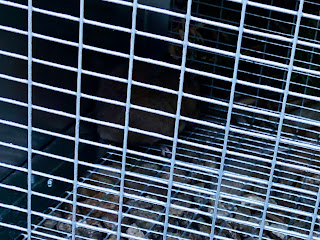 He's only sorry because he got caught.
Contacting the SD County Office of Environmental Health  An inspector came within about three days of my email request.  He did a property inspection and gave me traps and a bait station.  Free and very helpful.  Thank you, Ivan!
Mixed Results:
Havahart Live Traps for mice -  I caught many mice with this, but also had many occasions when the trap was closed, but no mice caught or the bait was taken without triggering the trap.  It is about a 50% success rate.
Pro - Built to last.  The deer mice are very cute, so it is fun to release them.
Con - Mixed results.  If you use this outside, ants will swam and eat the bait.  It is hard to set and can't be placed where the trap isn't kept level.
Rat-X and other poisons - Rat-X is supposed to only work on rodents.  San Diego County also recommends bromethalin and cholecalciferol as safe.  If a predator eats a poisoned rodent, the predator won't be harmed.  These poisons are used in D-Con and other readily available products.
Pro: Easy to place in bait stations.
Con:  Not recommended to use indoors, because the rodent may die in the attic or walls and smell for weeks.  It is difficult to tell if these work.  Mice clearly ate the Rat-X, but after a week or so, they stopped.  Yet, there were still mice around.
Pest exclusion - A company put a metal screen on the bathroom exhaust fan vent.  This vent is a pipe that extends from the roof.  We had a problem with mice in the garage and I found a small hole that they used to enter the garage and sealed it with dry wall compound.
Pro: We had the vent sealed after we trapped several rats.  We haven't had rats in the space since.
Con:  The roof work was part of an expensive pest control service.  Also, we were fortunate that we evicted the rats before the vent was closed.  Otherwise, we would have had dead rats in the ceiling.
Tomcat Kill & Contain Trap - I only caught one mouse with this.
Pro:  Mouse is killed and kept within the trap so you don't have to look at it.  Very easy to bait and set.
Con:  Mice knock this over easily.  I had to tape it onto a piece of cardboard.  The mice seemed to ignore the trap.
Bucket trap - I filled a large bucket with bait and then constructed a ramp.  The mice ate the bait and then were able to jump out of the bucket.  I tried it with water, so it became a kill trap.  I caught one mouse.  I was never successful again.
Pro:  Free and easy to construct
Con:  Not great results.
Not good:
I paid $3,600 to have the insulation in my attic removed, the attic vacuumed and then sanitized with a bleach solution.  This didn't help!  As part of the cost, they also inspected and attic and closed off points of entry.  This did help.  They also were the company that closed off the exhaust vent.  The fee also includes one year of additional pest inspections.  They have cheerfully come out and done additional pest exclusion work.  I think the attic is finally mouse free, but it took them two visits.
Safeguard EZ Set mouse traps - this mice never entered these, despite being baited with peanut butter.