A Day of the Dead kit from MexGrocer 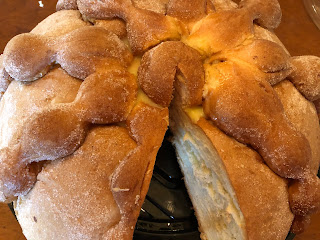 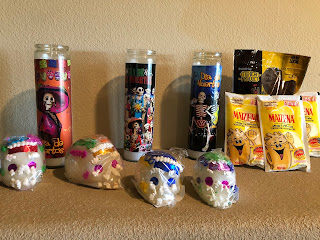 Because of the pandemic, the public celebrations of Dia de los Muertos were cancelled.  There is usually a big parade in Old Town, San Diego.  I ordered this kit from MexGrocer as an alternative.  I've used MexGrocer for many years as a source of products such as tortilla presses and moles.  The kit came with the traditional bread for the Day of the Dead, three candles, four sugar skulls, three packages of Maizena and a package of instant Ibarra hot chocolate.  All this was $64 including shipping.

The bread was enormous!  It was the size of half a basketball.  It was very delicious - soft, slightly sweet and then brushed with a little dulce de leche.  I could not have made this as well from scratch.  It also kept fresh for several days.  The decoration on top is meant to represent bones.

I've never had Maizena.  It is meant to be added to milk and then served warm.  It is made from corn starch.  I haven't gotten around to trying it.  I also wasn't familiar with the powdered Ibarra hot chocolate mix.  It is supposed to taste the same as the traditional thick discs, which make a delicious drink, but can have a gritty residue.

I was really pleased with the kit.  I enjoy trying new products.  The skulls are a cool traditional element and then will last for many more holidays.  The bread was the highlight!  I ate three big pieces a day with plenty of butter and was very happy.