Kings Canyon offers dramatic views of mountains along the Sierra Crest, stands of towering sequoias and several waterfalls.  We stayed in Visalia and drove about an hour and 15 to the park entrance (Big Stump).  It was a mostly flat drive through commercial fruit and nut farms.  It wasn't as harrowing as the drive into Sequoia.  The entrance is also the north entrance to Sequoia National Park and the two parks are adjacent and share a surrounding wilderness area.  It is a short drive to the first feature - the General Grant Grove, which preserves the tallest tree in the world.  It was amazing.  There is a well-paved, fairly level path through the trees making it easy for all the enjoy.

Then, we drove to an overlook of the canyon with a view of Hume Lake.  I could see and hear gray-crowned rosy finches, but couldn't get a good photo.  We also saw vultures and later read that California condors have returned to the area.  I hope that was what we saw!

We drove down to Hume Lake, which is the site of a camp.  It is a very busy place with a restaurant, boat rentals, a snack bar and more.  There were many people and few masks, so we left after a few minutes.  We did see a deer.

We then made the pretty drive down into the canyon.  It is almost 40 miles to get to Cedar Grove.  It is similar to the drive to Big Sur, but with a canyon on one side instead of the ocean.  There are plenty of places to pull out and admire the view.  There is actually a gas station and ice cream stand along the way.  (We stopped on the way back.)  The descent levels out and you drive several miles along a pretty river.  Almost at the end of the road, is a wonderful waterfall at the Roaring River.  A short hike takes you to a meadow.  On the drive back, we stopped at another taller waterfall.

Most of Kings Canyon is a wilderness area free from roads and open for backpackers.  We aren't backpackers, but the drive, waterfalls, wildflowers and walks along the river made the park memorable. 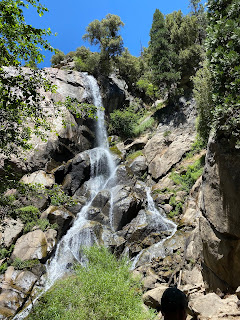 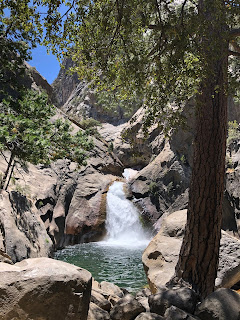