We started with an awesome lunch at Agave in Santa Barbara.  The restaurant had just open for social distance eating-in.  We had a great guava margarita and excellent burritos.  Then, we walked along Stearns Wharf and out onto the pier.  Most people were not wearing masks and it was crowded, so we left sooner than we would have otherwise.

Santa Barbara is one of the oldest cities in California.  It was founded in 1782 with a presidio and a mission.  We took a walking tour of downtown.  We started at the courthouse is a stunning building with a lot of nice details.  Although it was built in 1929, it looks much older, because the architectural style is Spanish Colonial. 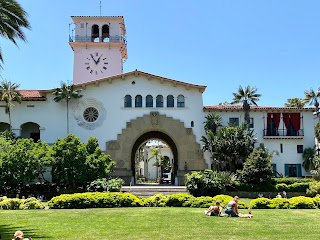 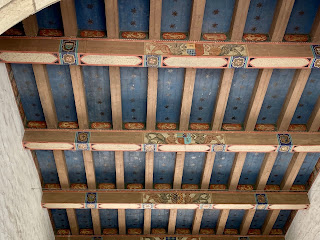 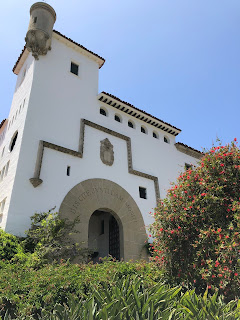 The downtown has several historic sites including a presidio and several early adobe buildings.  Although most of the shops were closed, there were plenty of interesting buildings to see.  We spent over an hour just walking in the downtown.

We drove over to UC Santa Barbara, which sits on the beach.  There is also a small lagoon and walking trails.  It is on a point, so there is an over 180 degree view down the coast and then around the point.  Because the University is closed, it was easy to find parking.  The University itself is very pretty and a much more manageable size than many of the other UC's.

The strangest thing about Santa Barbara is that the coastline runs east-west, so the sun rises and sets in what seems like an unexpected place.  Although the California coast seems to run almost due north-south, there are many areas where curves out to form these east-west beaches.

I've always been told Santa Barbara is where San Diegans go for vacation.  It was an exceptionally beautiful small city.  Although we couldn't enjoy some of the attractions like the Botanical Garden, we had a very pleasant day.

This is the Presidio: 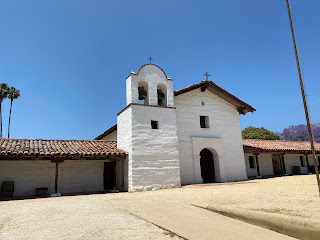