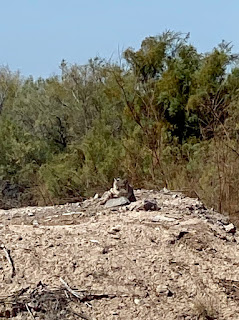 It's been confusing figuring out which parks are open.  Some parks are open, but the parking lots are closed.  We took a chance on the Sonny Bono Salton Sea National Wildlife Refuge knowing that the visitors center was likely closed.  The parking lot was open and there is immediate access to a two-story observation tower.

The Refuge isn't beautiful.  The trails are wide, rutted dirt roads and there is very little shade.  There are open "bald" patches of baked earth and dirt dikes enclosing murky canals.  BUT, THE WILDLIFE.

We saw so many birds, including a phainopepla (a new species to me), red-winged blackbirds, some really large mourning doves, water fowl, gulls, quail after quail and countless rabbits.  The most exciting part was a bobcat, about 25 feet from us.  We got to watch it for about two minutes before it noticed us.  Minutes later we saw a burrowing owl!

The Refuge includes shoreline of the Salton Sea.  This body of water was formed when the Colorado River overtopped its banks in 1905 and flooded into the ancient lake bed.  The trail we were on didn't go to the beach, because it was separated by a large marshy margin.  I definitely want to return in the early spring to look at the migratory birds.  This is apparently a popular stopover for them.  Older people will remember Sonny Bono, who sang with Cher.  He went on to become a Congressman representing California's 44th district and helped create the Refuge.

The road to the Refuge passes by some industrial-looking facilities.  It isn't scenic and doesn't seem like a road that leads to a natural area.  The many planted fields of Imperial Valley attract birds, as well, such as egrets and blackbirds.  Keep your eyes open and you are likely to see some interesting birds.