Tiny organisms can do big things!  Dinoflagellates are one-celled plankton and when they get together in a bloom, they create problems and also natural art.  San Diego is experiencing a "red tide" caused by a massive increase in these little fellows.  The ocean water is rusty-brown and smelly.  The red tide can kill some fish.  The dinoflagellates also create a weird blue glow when disturbed - even by the crash of waves.

This phenomenon has been going on for several weeks.  We parked in Solana Beach and walked down to Dog Beach to check it out.  Dog Beach is the northern-most beach in Del Mar, across from the Fairgrounds.

The sun set and as the ocean darkened, there was a glow from the tops of the waves as the broke.  It was amazing!  The light show moved in horizontal lines following the curl of the waves. 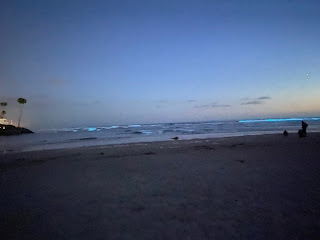 Our pictures came out surprisingly well.  There was still some ambient light from the newly set sun, but ocean was dark enough that the glow was very clear.  We got to the beach at sunset and stayed until about 9:30 PM.  The beach had about fifty people spread out and plenty of happy dogs.  The only negative about the spot was the car lights along Hwy 1.  This phenomenon is visible along the beaches of San Diego and up to Dana Point.  You need to see it somewhere the waves break, because the disturbance is what causes dinoflagellates to glow.  (The theory is that it helps them escape predators and lots of animals like to eat plankton.)

The red tides are unpredictable.  Years go by without a red tide, but they seem to be associated with the upwelling of warm water.  It is also difficult to predict how long they last.  The Scripps Institute has a good explanation of this here:  https://scripps.ucsd.edu/news/everything-you-wanted-know-about-red-tides