Most San Diego residents recognize the carillon played from the California Tower in Balboa Park.  The cheerful chimes mark the hour and half-hour and the Tower is visible from most parts of the Park.  It was closed for a year to be retrofitted for earthquake stability.  It has been open for tours for a few weeks.  The tour begins inside the Museum of Man.  A ticket is $10.  It is a climb of eight flights, but there is a stop on each floor.  The docent gave a brief history of the Park and there is a special emphasis on the Chinese-American, Latino and Kumeyaay communities.  The last group is the indigenous people of the greater San Diego area.

The tour stops on the eighth floor.  The views are great.  To the west, you can see the Coronado Bridge and downtown; to the south, the Laguna Mountains ranging into Mexico.  There is a great view of the Park and the Zoo.

It is an easy climb.  The stairs are a little steep and there is a spiral staircase on the last level.

The Museum of Man has some interesting new exhibits.  There is one about pets and the wide range of animals people keep as pets from beetles to the more familiar.  There is also one about secrets.  You could spend a lot of time reading there.  Some of the secrets are funny and relatable - a person confesses that s/he sometimes tosses out dirty pans, rather than clean them.  Some are very sad, like people confessing that they are in a relationship with their "second choice".

After the tour, I went to the San Diego Art Institute.  This small gallery is focused on experimental art.  The current show is Illumination, which connects artists with cutting-edge scientific research.  The results are artistic interpretations of science such as glial cells, directed sound and more. 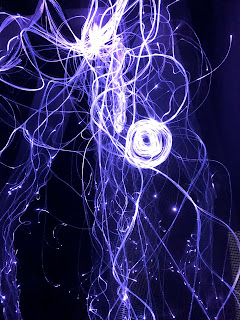