The National Museum of Nuclear Science & History presents a fact-forward history of the development of the nuclear bomb.  The emphasis is on the history of the break-throughs in physics, the Manhattan project, the detonations and the role of the nuclear weapons in the Cold War.  It doesn't try to render a moral judgement.  Fear that Nazi Germany and Japan also understood that nuclear fission could produce a weapon prompted Leo Szilard to contact Albert Einstein.  Szilard drafted a letter of warning to Roosevelt that Einstein signed, which lead to the development of nuclear weapons by the U.S.

It is a compelling story and well told through the exhibits, which include artifacts and video.  There was also a special exhibit about the history of the B-52.  Outside, there is a B-52 on display.

The Museum also includes some of the odd cultural responses to nuclear energy, such as a set of nuclear rector toys, movie posters and beauty and health products that contained radioactive elements.  (Radioactive skin creme is a bad idea!). 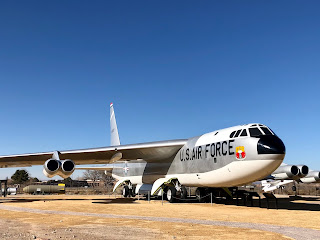