The most dramatic feature of the Albuquerque landscape is the Sandia Mountains which jut abruptly from the flat expanse.  The name means "watermelon" in Spanish.  They glow an ethereal pink in the sunset.  The Sandia Peak Tramway offers a 10,000+ ascent to the peak in an aerial gondola.  It is the longest tramway in the U.S. I was too awestruck to take photos on the tram itself.  The rock formations are amazing.  On top of the mountain, the views are stunning.  There is a 360 degree view and the clear air made it easy to see even distant mountains.  It is much colder up there and there was plenty of snow.

The ride is fifteen minutes each way.  You can buy a one-way ticket and hike to the top.  (It takes about five hours).  There is a cafe at the base and at the top. 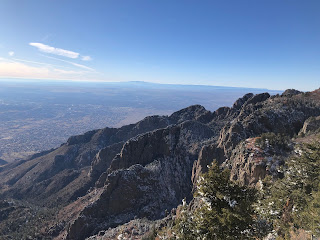 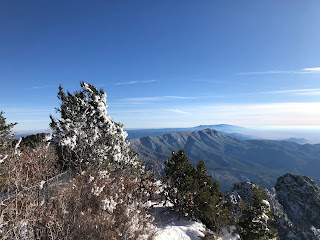