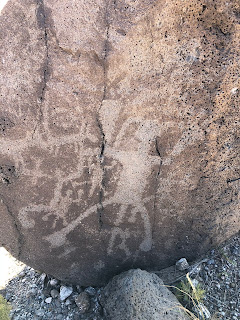 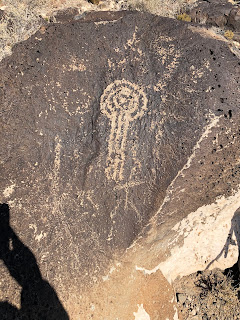 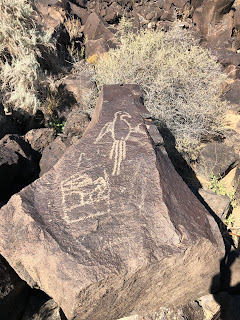 Our first stop was the Visitors Center.  This is staffed by helpful park personnel.  We arrived around 4 PM and were told that the short trail closed at 4 PM and the two other canyons closed at sunset (around 30 minutes later).  So, we came back the next day.  We went to the Boca Negra canyon, which has the shortest trails.  The Petroglyph National Monument contains around 25,000 carvings spread over 17 miles.  Most were carved into volcanic rock beginning in the 1300's by the indigenous people.  Some are easily recognizable as birds, animals or people.  Some seem abstract or symbolic.  They are thought-provoking and evocative.  The meaning and intention have been lost to time.  Even the native peoples of the area, likely descendants of the creators, disagree about their interpretations.

When you enter the Boca Negra area by car, the first small parking lot puts you are the base of a very steep hill.  There are several carvings at the bottom of the hill, but you then have to scramble up a roughly paved and very steep path with few handrails.  If you proceed to the next parking lot, the trails are much most level and easier.

We hope to return to look at the other two areas.  The Monument is within Albuquerque city limits are in easy to find and reach.