The Indian Pueblo Cultural Center is an excellent introduction to the culture of the indigenous communities around Albuquerque.  There is a museum portion that tells the history of the nineteen culturally distinct peoples.  This narrative includes the Pueblo Revolt of 1680, when the native peoples overthrew Spanish control.  There are interesting models of the typical architecture of the pueblos and examples of important crafts, such as pottery making.  I was especially interested in the several languages of the area.  There is audio of greetings in Keres, Tewa and more.

Another gallery focused on well known Pueblo artisans, especially ceramic artists.  There was also a temporary exhibit of art work by local school children.  Many are fine artists in their own right.

The Cultural Center also has performances by local dance groups on the weekends.  We, unfortunately, missed these.

The Center has a large, attractive restaurant that serves breakfast, lunch and dinner.  The extensive menu is focused on local cuisine with "pre-contact" items, such as bison, as well as New Mexico staples such as green chile stew.  I had the Tewa taco, which is served on a fry bread.  It was delicious and the portion size was ample. 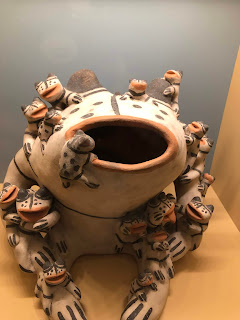 Story telling is an important cultural tradition and this piece shows that even frogs have stories! 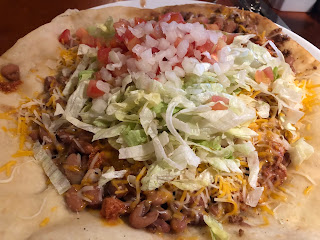 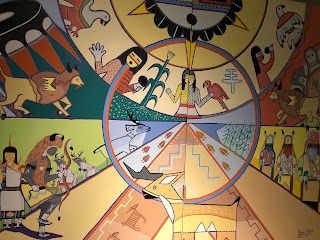 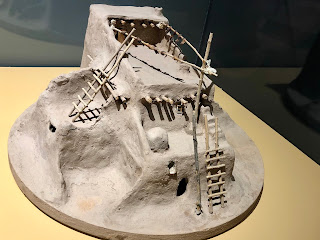