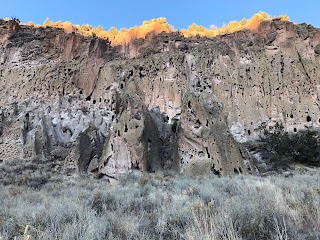 We drove about two hours north of Albuquerque to Los Alamos.  First, we stopped at the Bradbury Science Museum.  This museum presents the history of the Los Alamos Labs, which were critical in the development of the nuclear bomb.  The Labs will exist working on issues with the aging of weapons.

From Los Alamos, we drove to Bandolier National Monument.  We drove down a small scenic road, but easily found the park entrance.  From the Visitors Center, there is a short loop trail that goes past amazing cliffs that are oddly porous.  Early settlers in the area lived in the small caves, using ladders to enter these natural openings.  It is likely that these settlers are the ancestors of the modern Pueblo peoples who live in New Mexico today.

It is a good location.  The nearby creek runs year round the the caves are high enough to keep people dry during flooding and offer protection from invaders.  The Park service has put up recreations of the ladders, so you can explore some of them.  Archaeologists believe that many were built out with brick and wooden scaffolding to enlarge the space.  Many show evidence of cooking fires.  Archaeologists have reconstructed the grid farms and restored some kivas.

The area is naturally and spectacularly beautiful.  In the lowering sun, the cliffs glow.  I didn't take a lot of pictures, because it was icy and my hands were cold.