Tahona Bar, San Diego on the Day of the Dead

"Dia de los Muertos" (the Day of the Dead) is Old Town's Black Friday.  We went Saturday, which was day two of the celebration.  It was packed!  Most of the restaurants had special activities, like decorating sugar skulls or live entertainment.  The shops were busy. There was a small parade with costumed performing honoring the Aztec traditions of the holiday.  The Day of the Dead is a Catholic holy day to pray for the departed.  The imagery associated with celebration in Mexico is linked with Aztec traditions worshipping Mictecacihuatl, Queen of the Underworld.

The best part of the day was seeing the many women dressed like La Calavera Catrina.  This figure is a female skeleton in fancy dress.  Many women had very beautiful dresses and excellent make-up.  I felt underdressed.

We had reservations at Tahona Bar, so we had to push our way through the crowds.  The focus is on mezcal.  Tequila is made from the blue agave, while mezcal is made from any other type of agave.  Mezcal is pleasantly smoky.  I started with a "hi and dry", which was a delicious mezcal cocktail, similar to a classic gin fizz.

The cuisine is Oaxacan, so it is a welcome addition to Old Town with its many restaurants all serving Norteno-style food.  We started with house chips that were served with three salsas.  Oaxaca is best known for its moles - delicious, spicy and complex sauces.  We had a flight of moles.  The three moles were presented over a tortilla stuffed with potato, which served as a neutral base that allowed the taste of the  moles to preside.  It was excellent.  That dish alone makes me sure to come back.

I had a salad of watermelon with hoja santa and cotija cheese.  My friend had the fish of the day.  It was a very satisfying meal.

The service was slow.  We arrived around 5:45 and the restaurant wasn't full, although the bar was busy.  The music was very loud, so conversation at the table was impossible.  The food was very good, but I felt like the atmosphere was more bar than restaurant, so be prepared. 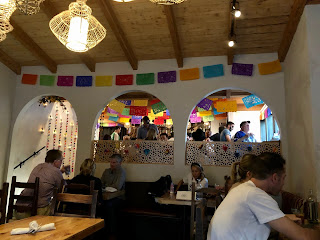 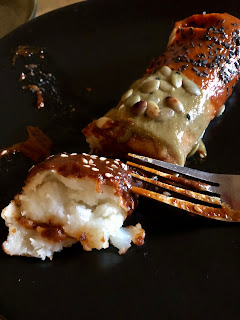 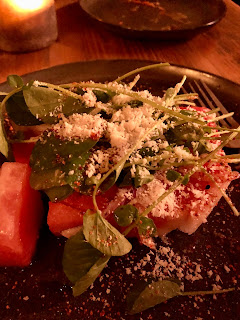