Mason Bates and Mahler performed by the San Diego Symphony 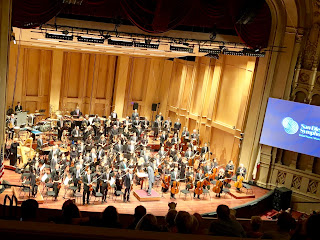 The orchestra and conductor deserved the thunderous applause on Sunday and also a long nap and a spa day.  Both Mason Bates' Alternative Energy and Mahler's Symphony No. 5 were massive work-outs for every member of the ensemble.  I particularly enjoyed the Mason Bates piece.  It was new to me and a new work for the San Diego Symphony.  It featured some unusual percussion (in the first section, simulating a car engine) and very effective recorded background sounds from Fermilab, which served as a menacing continuo in the second section.  The composition gave every part of the orchestra some exciting work and was a fantastic opening work for the season.  (If they opened every season with Alternative Energy I would not object.)

Mahler is not my favorite composer, but the orchestra sounded amazing.  This Symphony showcases the brass section and they were terrific.  I'm very excited to hear more from Rafael Payare, who is the new Music Director, although he has been a frequent guest conductor in San Diego in the past.

There are two large screens on either side of the proscenium, which showed live camera of parts of the orchestra.  I enjoyed this feature.  It also marked the each movement with the tempo.  There was a brief packet before the Mahler with interviews with some of the section principals.  I thought this was an effective way to engage the audience.  Classical music is part of the daily lives of fewer and fewer people.  I think the screens are a good way to involve people who may not have much familiarity with the music.

I always come early for the introductory talk by Nuvi Mehta.  He does a great job walking the audience through the major themes of the upcoming work.  It is really helpful and he places each composition in the historical context and the personal context of the composer.