Dinner was an orchard salad; Waygu Zabuton steak with broccolini, goat cheese potatoes and a mushroom demi; and lemon bavarian mousse.  I didn't take a single picture of the excellent food, because the "entertainment" was so distracting:

Animal Ambassador dinners allow guests to learn about some of the animals through a trainer talk and animal meet-and-greet.  It was cat night!  There are currently two young cheetahs at the San Diego Zoo Safari Park.  Each individually strolled on a leash with their emotional support dog.  The animals come up very close and it was very exciting.  Then, both young cheetahs came through and the trainers talked about the cheetah-dog pairing and how it helps cheetahs feel comfortable being around people and encountering new environments.  The dogs are Anatolian shepherds and they were impressive on their own.  The eight-month-old cheetahs are training to become animal ambassadors and this was one of their first nights out.

The next animal was a beautiful caracal.  They look like miniature pumas but with alert, tufted, stand-up ears.  We learned about their hunting style - they can knock birds out of the sky by leaping and swatting.  A very cute serval walked through on a leash, next.  Servals are often out in the animal talk area at the Safari Park.  Again, the cat was lead through the banquet tables and was close enough to touch.

The finale was Ruuxa, the cheetah and her two Rhodesian Ridgeback companions.  We learned the amazing story of Ruuxa, who was paired with a dog, only to have the dog diagnosed with cancer.  The trainers introduced another dog, concerned that Raina might die.  Raina underwent treatment and beat the cancer, so the trio with trainers forms a bit of a squad now.

The whole dinner was delightful.  The animal encounters were amazing, the food excellent and the trainer's talk was interesting.  All the special programs at the Zoo and the Safari Park I have attended have been exceptional.  It is a special way to experience more of the Zoo.


Before the dinner, we went to the lemur walk-thru: 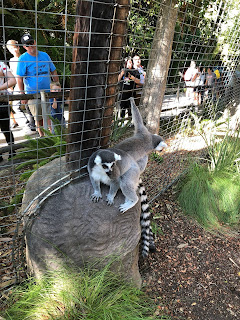