Meeting fox friends at the Judith A. Bassett Canid Education and Conservation Center in Santa Ysabel 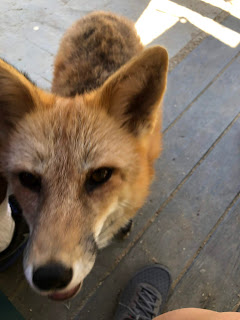 The story of these remarkable foxes begins in the Soviet Union.  Scientists there were interested in how animals became domesticated - a critical development in human history.  They began to breed foxes, choosing the most placid and tractable.  Over the course of decades, the result was a truly domesticated fox.  A domesticated animal is biologically different from its wild counterpart.  Its brain produces more serotonin and less cortisol.  It has smaller adrenal glands.  It has a much less developed fight-or-flight response and so, is more adaptable to new situations.  I watched an episode on Nova, the PBS science series, many years ago, about these foxes.

The foxes at the Judith A. Bassett Canid Education and Conservation Center were imported from this domesticated fox population in Russia.  There are three and they are calm, curious and a delight to meet.  There are only twelve of these truly domesticated foxes from Russia in the U.S. In addition, the Bassett's include one U.S. fox.  This fox is tame, but not domesticated.  Although Ishka was hand-raised to be a pet, she is not from a lineage bred for a domestication.  She is a hand-raised wild animal.  Although she is accustomed to people, she is much less interested in engaging with people.  We were allowed to give the domesticated foxes nice back scratches, but we were advised not to touch Ishka, because her behavior is unpredictable.

Our encounter started a 10-minute drive from Dudley's Bakery in Santa Ysabel.  We followed a winding road that offered great views of Lake Henshawe.  Then, we turned off onto a dirt road.  The second right, marked by a banner takes you to the Center.  We were greeted by two humans and two New Guinea Singing Dogs.  These dogs are also fascinating.  They are believed to be a primitive dog - the species before it was subject to breeding for a purpose such as guarding, herding or to become decorative dogs like the pug.  They look similar to a basenji.  They behave very differently from an average dog.  They were very interested in licking us.  They also looked intently into our faces and whined.  They were hopeful that we would regurgitate our food for them.  When they were put away, we could hear them "singing"- a musical yodel.


Then, we walked down to the fox area.  We sat on a bench in the shade.  First, Viktor, a handsome red fox, came out.  He was eager for a back scratch and investigated our shoes and then played with his toys.  Although all the foxes are the same species, the second fox had a black coat.  He was very focused on his toys and played enthusiastically with a cat lure.  The next fox had a beautiful black-and-white coat.  The foxes played and seemed to enjoy our attention.  We hand fed them treats.  The humans told us about the history of the foxes, their biology, research around domestication and more.  I was particularly struck by the interest autism researchers have in these animals.  The genes that promote domestication also confer an ability to read social cues.  This ability seems to be absent in people with autism.  Learning about the "domestication syndrome" was fascinating.

We were introduced at the end to Ishka, the tame fox.  I was shocked to learn that foxes are still farmed for fur in the U.S.  I got to hold Viktor and have my picture taken.  Our visit lasted about 1-1/2 hours. We enjoyed meeting the Bassetts (these are the humans) and learning about their plans to expand the Center and introduce more canine species.  Encounters are by appointment only. 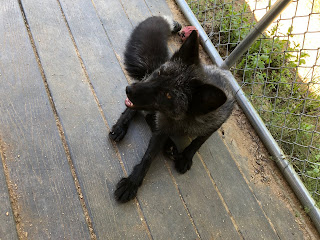 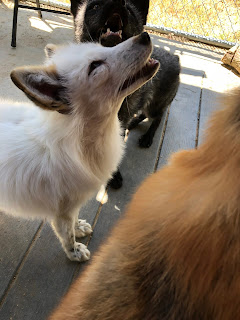 The encounter is a excellent experience for anyone who enjoys animals.  The foxes are stunningly beautiful with behavior that seem almost between a dog and a cat.  They had dog confidence, but chased pull toys very much like a cat.  The New Guinea Singing Dogs were also very cute.  It is also a worthwhile experience for anyone interested in genetics or behavioral science or neuroscience.  I am looking forward to visiting the Center again as it progresses.  It was a very thought-provoking experience and meeting the animals was a treat!

You can read more about the original Russian experiments here: