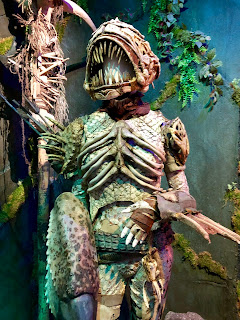 The Warner Brothers Studio tour is a fun insight into how movies and TV shows are made.  A tour van takes you through the enormous backlot and past dozens of facades that have appeared in countless movie and TV scenes.  Most interesting is the reveal that the inside of the facades are empty and the exteriors are actually a bit shabby.  It makes you appreciate the work that goes into making a Chicago street set come alive.  There is a little bit of elevated train that was frequently used in "ER".  The tour includes a drive through the workshops that include metal fabrication, plastic molding and more.  Much of the backlot has more of a warehouse/workshop vibe than glamour.  There is a funny reveal that the scene of the T. Rex chasing the jeep in "Jurassic Park" was actually filmed on about 100 feet of path through a wooded patch.  We also visited the set of "Ellen".

There are displays of costumes from "Aquaman", the Harry Potter movies, "Wonder Woman" and "Fantastic Beasts..."  There is  also a display of some the vehicles used by Batman.

There is a self-tour through a museum that covers the history of the studio.

It was surprising to me that the backlot is used by rival movie companies.  They just pay a fee to use some of the spaces.  Also, that there are complicated relationships between the studios.  For example, Warner Brothers owns the rights to the Harry Potter movies, but is selling use of the images to Universal Studios to develop a theme park.

It was a fun experience.  It cost $69 per person and took about 3 hours.  There is a cafe for lunch.

There is a lot of Harry Potter stuff: