I have long been interested in the culture of the native peoples of California and the history of modern California.  Mission San Gabriel Archangel is part of the original set of missions in Alta California.  It was founded in 1771 and is located in San Gabriel, about ten miles from Los Angeles.  The Mission has interesting exhibits about the Tongva people, who lived in the area when the Mission was established.  The Mission itself is very beautiful with extensive grounds, a cemetery and exhibits about mission life.  There was a wedding, the day we visited, so we couldn't enter the chapel.  The Mission is still an active Catholic church.

The legacy of the Spanish mission system is certainly mixed.  Many native peoples were killed by disease soon after contact with the foreigners.  Fortunately, there are still people in the area who identify as Tongva, so their culture hasn't been completely destroyed.  Although the Mission doesn't discuss this, a female Tongva leader attempted a violent resistance to encroachment by the Spanish. 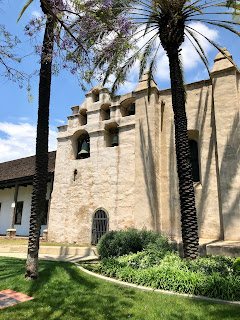