The museum is an enigmatic place - part art installation, part natural history museum, part Victorian era cabinet of curiosities.  Photography isn't permitted, so I don't have any pictures of the exhibits.  At first, the Museum of Jurassic Technology is a bit off-putting, because the interior is very dark.  It takes a few minutes to realize that the menacing shapes in the gloom are merely fellow befuddled museum goers.  Some of the exhibits are the sort that might be found in any natural history.  The floral radiographs are X-rays of flowers and they offer an interesting glimpse into the hidden structure of flowers as well as an intriguing "ghost" image of a plant.  There is a display, viewed through microscopes, of tiny works of art done with butterfly scales.  These are beautiful.

Similar to the dioramas of exotic animals that are the staple of any natural history museum is a bestiary.  It is more art than science.  The texts are based on medieval descriptions of animals and their behaviors.  The images of the animals, such as hyenas, appear as small holographic projections over the books.  It is a fascinating effect.

One of the most disturbing exhibits is of folk remedies.  It is easy to laugh at absurd cures, such as having a child breath from the bill of a duck (living!!!) to cure thrush of the mouth.  How would this even be accomplished?  However, many folk remedies, such as the use of natural lithium salts to cure melancholy, were refined and became standard medical treatments.

There are too many exhibits to discuss fully.  One of the most poignant exhibits is painted portraits of the dogs of the Russian space programs.  These were the first creatures in space and many of them perished.

There is a tea room with complimentary tea and cookies.  At the roof level is a charming garden.

The museum is thought-provoking.  I visited several days ago and am still pondering it all.  I believe the name is a nod, not to the era of the dinosaurs, but to the 1800's when early scientists excavated fossils and began to put together theories of the epochs.  (Jurassic is derived from the Jura mountains where fossils were discovered).  During the 1800's science was greatly advanced by individuals making observations.  (Darwin, for example, performed no experiments, but derived his ideas from keen and thoughtful observations of the natural world.)

The museum isn't for everyone and certainly not for anyone expecting a typical museum.  I wouldn't recommend it for young children, because many of the exhibits involve viewing at a particular height and you would have to hold a child up and then they might find it frustrating.  There isn't parking, but we found some in the neighborhood.  The hours are limited, so check the site.

I will visit again! 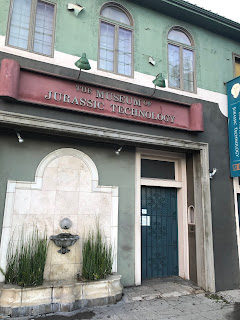 When I got to the garden, I forgot that photography wasn't permitted and I took a pictures of the doves. 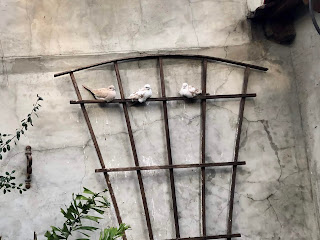