I got so inspired by Hawk Watch that I decided to start photographing and identifying birds I see.  The first is this:

This bird hangs around the edges of open meadows and seems to swoop down suddenly after insects.  It is colored like a penguin with a black back and head and a white underbelly.

I saw this flock of birds.  I didn't try to get close, so they wouldn't be disturbed.They flew in groups to eat pyrocantha berries and then return to the tree.  When I returned from my hike, they were gone and replaced by a single kestrel.  According to the internet, these birds are winter visitors to the area.  I think they are very attractive birds.


This is rendering of the cedar waxwing I found in an old book (published 1936) about North American birds: 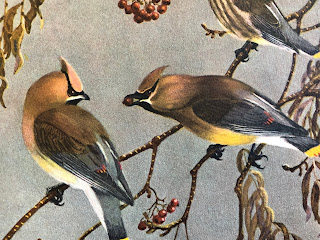 I walked by the Poway creek and startled these two cattle egrets.  They flew up to the light post and peered down at me with disapproval.


This isn't a good egret or even an awesome egret.  It is a GREAT egret (Ardea alba):

A flock of these modest birds descended on these vines and began yanking at the red flowers.  They were so intent on their business that I was able to sneak up on them.  I think it is a blue-gray gnatcatcher.  They didn't seem to be able to eat the flowers, so they soon lost interest and flew away. 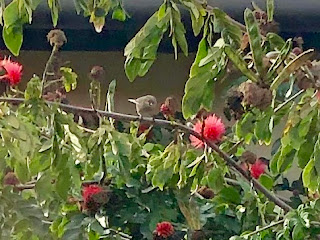 I think these are red-tailed hawks (Buteo jamaicensis): 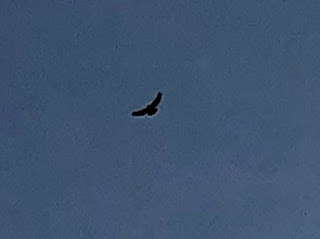 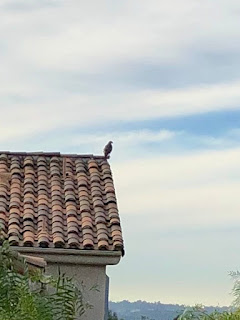 The broad tail and rounded wings suggest hawk.  There are a lot of different species of hawk in Southern California.  The red-tails are very common and often perch on light pole along the highway.

I see small flocks of killdeer near a golf course, but only certain times of the year:

Although they have distinctive sounds, I have never heard them make a sound.  They are very wary and impossible to approach.  Here is a picture from my awesome bird book: 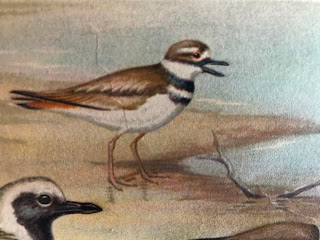 There are several species of hummingbirds in SoCal.  I've only seen this one in person: 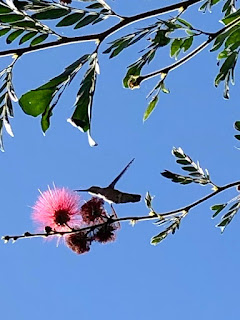 This is an Anna's Hummingbird (Calypte Anna).  This female is iridescent green with a gray underbelly.  The males are more colorful and have a patch of ruby feathers at their throats that is almost neon.  They are very confident birds.  They mob hawks, chatter at people who come too close and defend their territory against other hummingbirds.  Tiny, but fierce!  They really like these red flowers.

There are a lot of different tern species in Southern California.  I saw these guys at Cardiff State Beach.  It isn't a bird I usually see there.  I think it is a royal tern, but there are others that look similar, like the elegant tern. 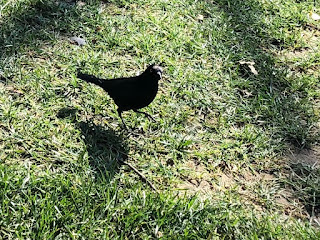 Blackbirds are very common, but attractive.  The males are black with an iridescent quality to their feathers.  They are active birds and seem curious.  It is easy to approach them and they enjoy stealing crumbs at outdoor restaurants.  The females are a solid gray. 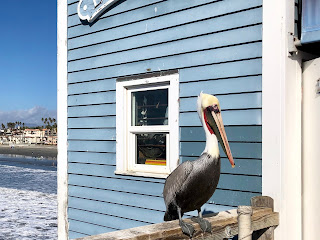 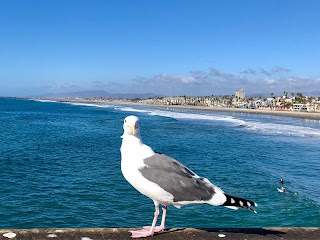 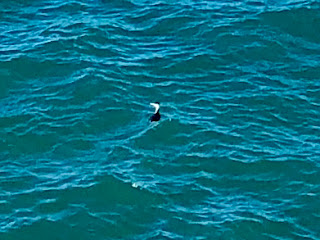 These three pictures were taken at the Oceanside Pier.  The Brown Pelican was sitting next to a snack shop.  There was a sign warning people that it bites.  Don't know the story - whether the pelican was injured or just liked to hang around the shop.  Gulls are of the order Laridae.  There are many species that look similar.  This is probably a California Gull.  My guess is that the last bird is a Phalacrocorax pelagicus - a species of cormorant.

This is a sanderling from Cardiff State Beach:


There were two towhees (pipilo maculatus) bickering.  I see these birds all the time, but it is so hard to get a photo.  They are wary and flit in and out of the bushes. 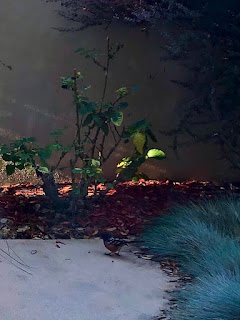 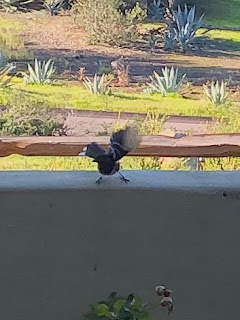 I took a long hike and saw a lot of birds.  I got a few good photos: 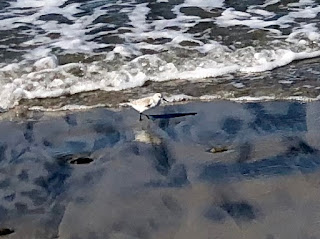 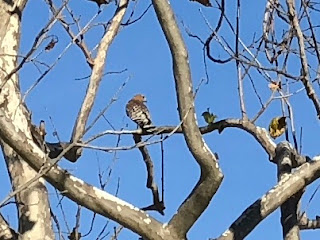 I see the hawk above frequently.  I think it is a California Red-Shouldered hawk.  They look similar to the ferruginous hawk.  But, I think the latter tends to hunt by sitting on the ground next to a gopher hole and waiting.  I haven't seen this behavior around here.

There are so many little birds.  I think this is a type of sparrow: 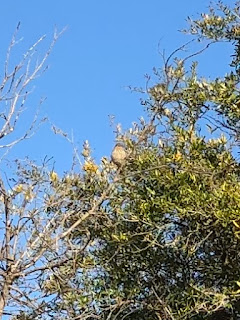 This yellow-green vireo got into with a hummingbird:  The vireo was yanking on the red flower and the hummingbird shot up and chased it away.  Such drama!  Such tiny, tiny drama! 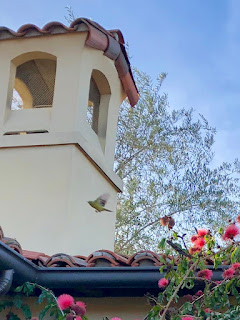 I think this next little fellow is a cattle egret, along he is standing in the surf at Cardiff State Beach:
His beak was yellow, which it the biggest difference I can see between a snowy egret and a cattle egret.  I see these cattle egrets in the lagoons often, but rarely in the surf. 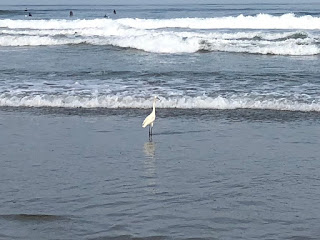 Mimus polyglottos is the common mockingbird.  They are confident birds and it is easier to get closer to them than most birds. 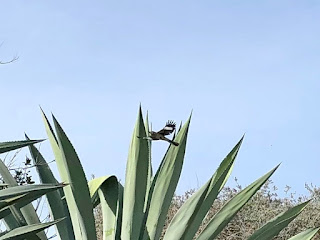 Geococcyx is the Latin name for the roadrunner.  These birds can fly, but prefer to scamper between the bushes.  I only see them in the spring.


The San Diego Safari Park is a surprisingly good place to see local birds.  They take advantage of the lagoons and probably snack on the food put out for the exotics.