Northern Vietnam as a tourist destination

The area around Ha Noi was much more prosperous and developed than I had expected.  It was more like Bangkok, with good roads and a lot of traffic, mostly scooter.  Outside the city, in smaller towns, there was ample evidence that people had disposable income.  There were shops with items like flowers, cakes, dresses and bonsai nurseries.  Outside the city, there were rice fields and vegetable gardens.  Interestingly, people put the family mausoleum in the middle of their ancestral rice paddies.  There were also many ducks farms with white ducks enjoying swims in small ponds surrounded by a fences.

The Vietnamese language is written using the Roman alphabet, like English.  It is a tonal language and the tones are indicated with marks above the vowels.  This alphabet was developed centuries ago by a missionary, when the vast majority of the Vietnamese people were illiterate and the royal court used Chinese characters.  This makes it much easier to pick up words and try to pronounce them.  For example, "com" (it should have a tonal mark over the o) is the word for rice.  Although it is difficult to pronounce correctly, a waiter or waitress will easily understand you want more rice, if you say "com".

We had originally planned to see the north and south, but there was so much to see in Vietnam that we decided to just see the north and save sights like Hue for another trip.  My family also went to Tam Coc, which they said was beautiful.  (I had a cold and needed to rest in the hotel.)  There were other things around Ha Noi we didn't have time for, so a person could easily spend a full week in the area.

While in Ha Noi, we first stayed at the J.W. Marriott.  This is a lovely, modern hotel with attractive grounds in a quiet area, but it is a considerable distance from the center of the city.  It is an especially slow journey at rush hour.  Then, we stayed at a Novotel, near Ha Long Bay.  Then, we finished our trip at the Sofitel Metropole in the center of Ha Noi.  This is a charming and historic hotel.  It was built in 1901 and the ambience is very French.  We took a tour, which included a bomb shelter built during the Vietnam War.

The most amusing and surprising thing was that more affluent Vietnamese people prefer to build luxury homes in the French style.  I imagine, as the country develops, some cities may resemble Paris.

A more typical building is this: 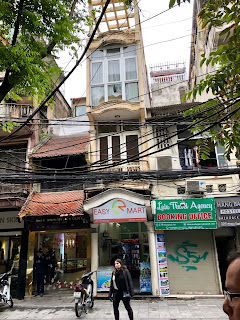 Most buildings are very narrow and multi-storied with a space for a shop on the bottom floor.

The other shocker was the weather.  One day it was in the low 80's and two days later it was in the 50's.  This was at the end of the December.  We needed warmer jackets than we had brought!