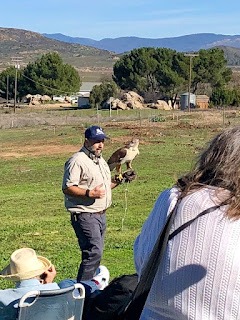 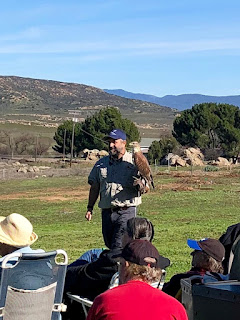 We misjudged how long the drive would take and got there 45 minutes early.  The place was already bustling with free coffee and donuts, a gift shop, a display by the San Diego Herpetological Society and spotting scopes to observe hawks out in the grasslands.  Hawk Watch is a program of the Wildlife Research Institute.  There were kestrels, a ferruginous hawk and a red-tail hawk observable with binoculars.  The ferruginous hawk, ferruginous just means rust colored, sat on the ground in a field waiting for a gopher to peep out.  We also saw a coyote trotting across the field.

The program began at 10 AM.  We got up-close views of a ferruginous hawk, a young red-tail hawk (they don't turn reddish until after their first molt) and a melanistic red-tail.  The melanistic red-tail has black plumage and is uncommon genetic variation of the more recognizable hawk.  Red-tails are very common in Southern California.

Then, there was a flight demonstration with the young hawk and his trainer.  At first, the hawk took off and peered down from a telephone wire.  The trainer pulled a lure and the hawk swooped down.  It was very exciting!

Then, four falcons were brought out as a comparison with the hawks.  There was a large gyrfalcon, a prairie falcon, peregrine falcon and a tiny falcon.

We couldn't stay for the full program, which included a naturalist-led walk to view golden eagle and bald eagle nesting sites.  There was also an opportunity to see some of the birds up close.

It was a fun and educational opportunity.  It is held in January and February on Saturdays.