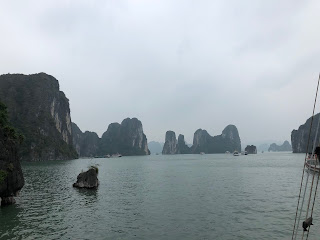 Ha Long Bay is full of small limestone islands which dramatically jut from the sea.  The effect is magical.  Not surprising, the islands were created by a dragon, which is currently resting at the bottom of the bay - so, no shouting!

There are many boats that take visitors through the bay.  These leave from a central cruise terminal.  It is all well organized and we joined a throng of tourists from China (the border is only a few miles away).  We had a private tour and ate a lovely lunch on board.  It is misty and so the islands appeared mysterious and intriguing.  We stopped to tour a large cave on one of the islands.  It was a dry, well-light cave.  (Caves usually give me the creeps because they are wet and dark).

The Bay is another must-see if you are in northern Vietnam.  It is spectacular and unlike anything in the U.S.  It is about a four-hour drive from Ha Noi.  We spent the night at the nearby Novotel and then cruised the following morning and then drove back to Ha Noi in the afternoon. 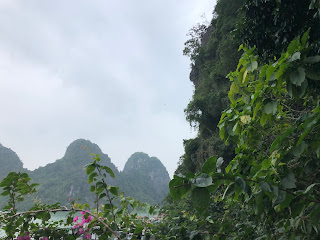 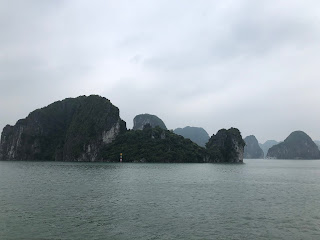