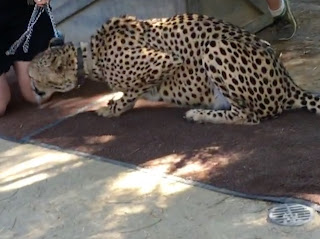 There is a public cheetah run most days at 3:30 PM.  We chose the VIP experience.  It was $18 per person (admission to the park is separate).  At 3:00, we were admitted to a shaded seating area.  Then, the staff brought a bat-eared fox as an animal ambassador.  The animal was on a lease and came about a foot from us.  It busily solved a puzzle box to get treats.  So cute!

Then, it was time for the cheetah run.  The cheetah has a dog fried, named Willow.  The animals walked the run path and then Willow ran the course following a lure.  Then the cheetah blazed down the 100 meter path in about 5.2 seconds.  It was so exciting!  To fast to film.  The trainers decide if the cheetah seems to be in the mood for another run.  She was, so she repeated the performance.

When the cheetah rested a bit and had a snack, she was allowed into our area for a visit.  She was on a leash.  She was about two feet away.  It was amazing!  We learned a lot about cheetahs and also about how the zoo animals are trained.  They are trained with a clicker and taught behaviors that make it possible for them to receive medical care.  It was a special experience!


Afterward, we had a snack at the newly opened Watering Hole at Kijami Overlook.  We saw giraffes and rhinos, including a baby rhino up close. 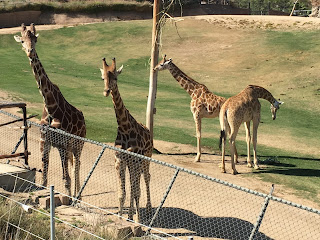