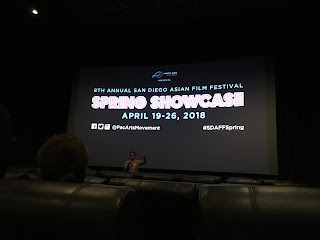 This was our second film at the San Diego Asian Film Festival.  Last year, we saw the delightful, "Bad Genius" at the main festival in the fall.  We enjoyed this Thai comedy-drama so much, we decide to attend each festival.

The Spring Showcase is a mini festival with twenty films from nine countries.  The fall festival offers an overwhelming selection of 100+ selections.

We saw "1987: When The Day Comes" an outstanding political thriller from South Korea.  It was based on the true story of the death of a college student who was tortured by anti-communist government agency.  The pacing of the film was breath-taking.  There were graphic scenes of torture and violence that made for difficult watching.  The film ended on a hopeful note showing the 1987 mass uprising that lead to democratic reform in South Korea.

Our attraction to the Film Festival is an interest in high quality movies.  Learning about a new culture is an added bonus.  I now have great confidence that every film offered at the SDAFF will be of great quality.  I'm looking forward to the fall!  It's a treat to have options besides dinosaur and super hero flicks.
Location: 100, 7510 Hazard Center Dr, San Diego, CA 92108, United States