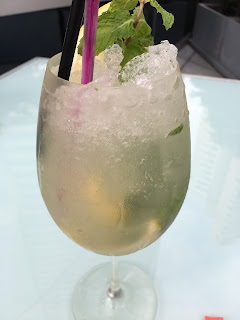 We had a wonderful stay at the W Hotel.  The concierge staff were extremely helpful and we took their suggestions for a tour to Ayutthaya and advice on how to travel around the city.

We ate at the restaurant, The Kitchen Table, many times.  They had a great breakfast buffet.  We especially enjoyed a selection on interesting infused water, such as bael fruit, ginger and chrysanthemum.  We often ate Thai food there for lunch.  There is a great drink menu, especially of flavored ice teas, such as Earl Grey with lavender.  They complimented the spicy Thai food.

We also had drinks at the Woo bar.  These were delicious.

The hotel attracts many gay men from China and other Southeast Asian countries.  There were lots of well-groomed young men in shorts, tank tops and athletic shoes.  They were very quiet.  The lobby was often full of people and yet the noise level was low.  Our rooms were quiet, despite the hotel being full for New Year’s Eve.

My only complaint is that the rooms are designed for couples.  The bathroom is separated from the bedroom by an opaque, blue glass wall.  When the light was on, the bathtub was visible.  I was traveling with my daughter and it was a bit awkward.