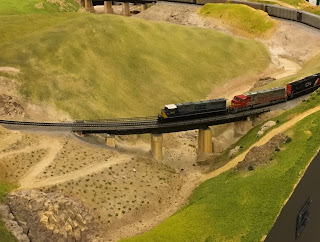 Young and old alike will marvel at the San Diego Model Railroad Museum.  Trains whizz by intricately detailed models of towns, train stations, bridges, businesses and more.  There are several different displays.  In the main hall, it is forever 1950, with period models of cars and billboard advertising.  In another room, there is a replica of the Tehachapi Pass of the Sierra Nevadas with trains ascending steep grades, disappearing through tunnels and clattering along bridges.  Another layout is focused on San Diego with many recognizable landmarks, including the train station downtown.  The Toy Train Gallery is currently running special Halloween trains with pumpkins, monsters and witches as passengers.  Outdoors, in the garden, is a railroad running through Balboa Park, circa 1915.

The Museum is located in Balboa Park, beneath the Museum of Photographic Arts, across from the Botanical Garden.