Kaaboo is a three-day rock music festival held annually on the Del Mar Fairgrounds.  It was our first Kaaboo and we had a great time!  Friday was a bit overwhelming.  There are four concert stages and performances at each.  It took a while to get oriented.  We saw X Ambassadors and Weezer on Day 1.  I particularly enjoyed Weezer’s normalcore cover of “Hey Yeah!” They were both terrific live.  We also caught the end of Kesha’s act.

Saturday, we saw The Tubes, Garbage, some of Eric Burdon & The Animals and then Jane’s Addiction.  Shirley Manson has an extraordinary voice and Garbage was my favorite performance of the day.

On Sunday, we saw Live and Alanis Morrisette.  Ed Kowalczyk is another great voice in rock.  He did a touching tribute to Chris Cornell.   Live is one of my all-time favorites and they sounded every better in person.  I’m so glad they are back together! 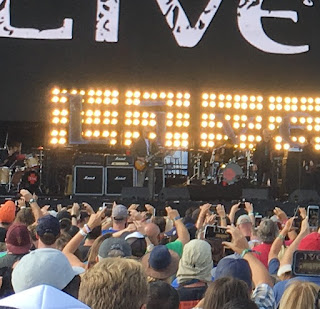 Alanis Morrisette was incredibly energetic and bubbly.  She seemed genuinely delighted to be there.  It was a funny contrast given that her music is cosmic angst served with a heap of bitterness.  We also caught part of James Taylor and Jason Derulo.

Some artists we didn’t see: Red Hot Chili Peppers, Muse, P!nk, Tom Petty, Logic, Ice Cube and many others.  There was too much to take in!

There is also a comedy club that runs during the festival.  It is inside in a dark space that tricks you into thinking you are in a late night comedy club.  We saw Maria Bamford, who is a sort of patron saint of the deranged and lost.  I had seen her on Late Night with Stephen Colbert.  She even found humor in her stint in a psych hospital.  Love her!  Other comics included: David Spade, Norm MacDonald and more.

The food at the festival is very good and supplied by an armada of food trucks.  We both had chicken shawarma with a choice of “brown people” spicy, “white people spicy” and “no spice.”  I also had beignets and iced coffee and an acai bowl.  There is a cooking stage that is part of the festival.

There was also an art exhibit and lots of murals throughout the grounds.  I’m very interested in art, but I thought the works exhibited were too commercial and looked like “T-shirt art”.  In a skit on Portlandia, shop owners’ answer to everything is to “put a bird on it.”  In California, every artist has to “put a skull on it.”  Too many portraits of Frida Kahlo, as well.  Nothing for Jose Luis Cuevas?!  He was a genius, too, and he just died a few months ago.

The festival is very well laid out and organized.  There are several air-conditioned buildings where you can escape the heat and light and take a break.  My only suggestion is would be that I think there should be a dessert pavilion.  There weren’t enough desserts!  There never are!

My one complaint is that parking is $40 per day.  Outrageous.  The lot is dirt and they spray water to keep down the dust, so you are actually parking in mud.  No!